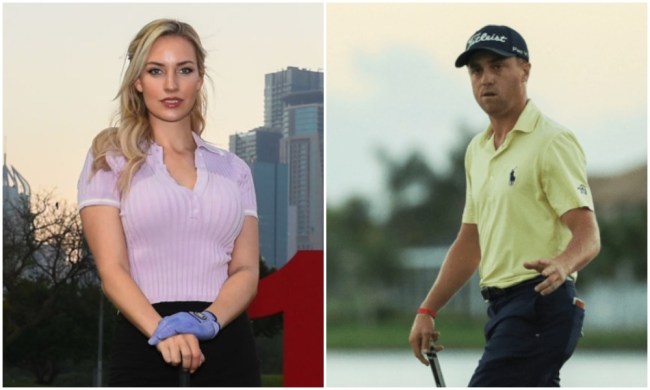 During the third round of the Sentry Tournament of Champions this past weekend, Justin Thomas was caught saying a homophobic slur after missing a par putt.

Following the third round, Thomas apologized for using the slur.

“I screwed up,” Thomas told Golf Digest. “I have to be better. I will be better. I deeply apologize to everybody and anybody who was offended. It’s embarrassing. That’s not me and it’s inexcusable, there’s no excuse. I’m an adult and there’s no place for that. It doesn’t matter who you are, no one’s above that. I have no excuse.”

Thomas was, and continues to be, on the receiving end of quite a bit of backlash on social media, and his actions have been the center of conversation in the golf world.

On Sunday, Paige Spiranac gave her thoughts about the situation in a response to a tweet in which one user tried to explain that if fans want hot mics then this sort of”raw emotion” is what fans are going to get. Spiranac explained that the word Thomas used is indefensible, but he shouldn’t be cancelled over it.

You can give raw emotion without being racist or homophobic. There are certain words that should not be said or tolerated. He should not be cancelled and I’m glad he apologized. But no one should ever defend the word he used

Thomas finished third at the Tournament of Champions, which Harris English won in a playoff. Following his final round on Sunday, Thomas admitted that golf wasn’t the only thing on his mind.

“Golf wasn’t the main thing on my mind. Usually being four back going into Sunday I’m thinking about one thing and one thing only and that’s trying to win the golf tournament,” Thomas said on Golf Channel. “Obviously had a lot of other things on my mind last night. I mean, I apologized yesterday. I don’t need to explain myself. I clearly screwed up. I made a terrible, terrible judgment call.

Thomas is not in the field for this week’s Sony Open in Honolulu.