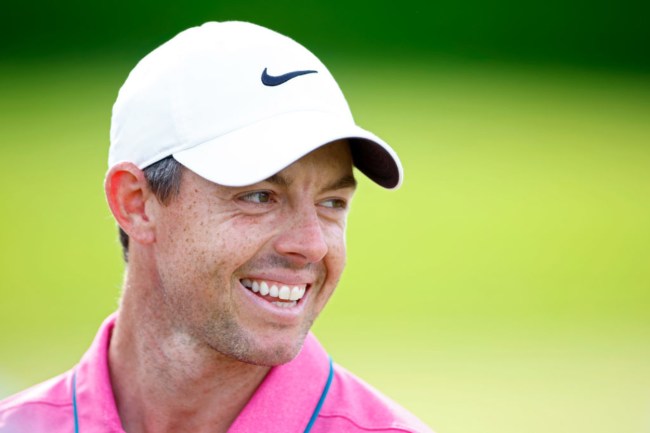 While LIV Golf’s inaugural event was the top storyline in the golf world this week, Rory McIlroy created a storyline of his own on Sunday en route to winning the RBC Canadian Open. Just moments after he capped off his final round 62 with a birdie on the 72nd hole, McIlroy made it a point to take a shot at Greg Norman, the CEO and frontman for the Saudi-backed rival circuit.

Sunday’s win was McIlroy’s second RBC Canadian Open title and it also gave him 21 career PGA Tour wins. Norman finished his career with 20 wins on Tour, which McIlroy was well aware of heading into Sunday’s final round.

Asked what this win and the scene at St. George’s meant to him, McIlroy took his jab at Norman.

“Today is something I’ll remember for a long, long time. My 21st PGA Tour win, one more than someone else and that gave me a little bit of extra insensitive today,” McIlroy said with a shrug.

A day @McIlroyRory will remember for a long time. pic.twitter.com/cbPk4w2jaN

McIlroy mentioned having one more PGA Tour win than Norman a second time during his post-round press conference as well.

Champ’s here. Opens his press conference with, “…and one more than Norman” pic.twitter.com/6fCzRYWkMK

Rory McIlroy Is Way Out On LIV Golf

Plenty of PGA Tour players have spoken out against the Saudi-backed LIV Golf Invitational Series, but none more so than McIlroy. Even when LIV Golf was just a rumor, McIlroy pledged his loyalty to the PGA Tour while bashing the breakaway circuit.

Earlier this week, McIlroy was asked to share his thoughts about the players who have elected to jump ship and play in the LIV Golf Invitational Series, and shared some very candid thoughts.

“Obviously money is a deciding factor in a lot of things in this world, but if it’s purely for money it never seems to go the way you want it to,” McIlroy said on Wednesday ahead of the RBC Canadian Open.

“It’s not something that I want to participate in, “I certainly understand the guys that have went. I understand what their goals and ambitions are in their life.”

LIV Golf recently announced that both Patrick Reed and Bryson DeChambeau are joining the likes of Dustin Johnson, Phil Mickelson, and Sergio Garcia on the controversial circuit moving forward.