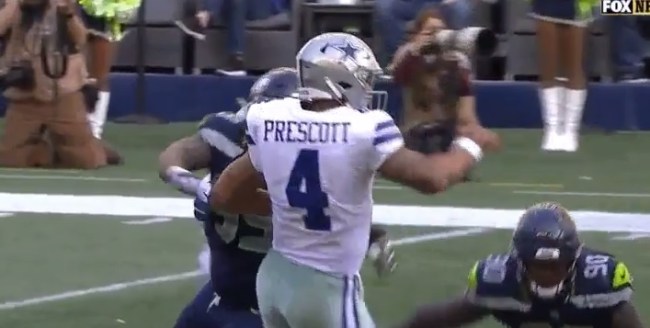 Earlier today Green Bay Packers defensive star Clay Matthews called out the NFL for “getting soft” when he was called for his third roughing the passer penalty in consecutive weeks.

Well, obviously, I don’t agree with it,” Matthews said after the game. “Again, last week I thought I hit the quarterback correctly. My head was to the side again, wrapped him up, and you see me as soon as I hit the ground, I tried to pull my hands out. Obviously, when you’re tackling a guy from the front, you’re going to land on him. I understand the spirit of the rule, I said that weeks prior, but when you have a hit like that, that’s a football play.”

All day today there have been several ridiculous roughing the passer penalties called but none of them were as bad as the one called in the Seahawks game where Dak Prescott was barely touched after the play but acted like he had gotten murdered.

The refs threw a flag on the play and the Internet was fucking pissed.

That roughing the passer call for @dak is one of the weakest calls I’ve ever seen in football. Just ridiculous. And @Dak jumped up looking for the call too. The @Seahawks should’ve ran over and gave him some @cottonelle tissue. No wonder he just got intercepted.

We just witnessed the worst roughing the passer call in American sporting history on Dak Prescott. Think the league doesn't want the Cowboys to be competitive?

Strongest statement: Fox Sports Troy Aikman, on a very questionable roughing the passer call against the Seahawks on Dak Prescott, “I’m not even going to comment on it. It’s ridiculous."

My six year old took a harder hit at soccer today than Dak just did on that “roughing the passer” penalty. Now he’s pissed that I just sent him out in the yard to throw a football though a tire 1000 Times. Everyday. For next 12 years. With each hand. #FutureQB. #paythatman

They called a roughing the passer penalty on Seattle pass rusher when he sneezed on @dak ! @NFL is soft

Dak Prescott deserves an Oscar for that flop. This roughing the passer rule is just ridiculous.