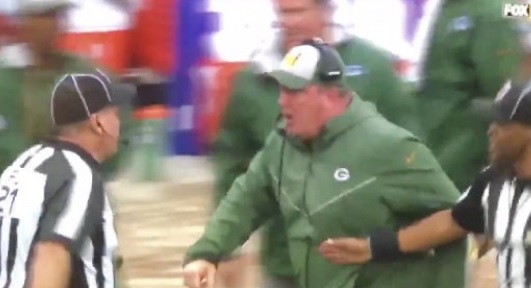 Last week, Clay Matthews was called for roughing the passer late against the Vikings that cost the Packers a win.

The NFL went on to double and triple down that the call was correct and wasn’t part of the league’s new “body weight” rule.

A league source reiterated Monday that the “technique of grabbing the passer from behind the leg or legs, scooping and pulling in an upward motion, is a foul.”

Both Matthews’ penalty and the one earlier in the game on Vikings linebacker Eric Kendricks fit into that category, according to the league. Those plays will be shared with teams by Al Riveron, the NFL’s senior vice president of officiating, to “reiterate that this tactic is a foul.”

Riveron will remind clubs the penalty has been on the books for several years and is not considered part of the 2018 “point of emphasis” related to defensive players landing on the quarterback.

Today, Matthews was called for yet another roughing the passer penalty which led to a full on meltdown by coach Mike McCarthy who went after the refs on the field.

#Packers Clay Matthews now has 3 weeks in a row with roughing the passer called against him.pic.twitter.com/LSfPmHKMW3

No way this is roughing the passer. Terrible call. pic.twitter.com/WUqPoWqxMd

After the Clay Matthews' roughing the passer call for the 3rd week in a row.#Packers coach Mike McCarthy lost it and went after the ref [no contact though]pic.twitter.com/ENqhknk7JW

Packers fans were also unhappy with the call.

I’ve seldom seen Mike McCarthy screaming at officials as he did protesting the penalty on Clay Matthews.

Just saw the Clay Matthews sack. It was a textbook tackle – literally how every kid is taught to tackle. Yet @NFL called it "roughing the passer." It was a sack. #Packers #GBvsWAS
Shameful and embarrassing.

#NFL is ruining a great game. It’s becoming unwatchable with the make believe penalties called against #claymatthews being the best examples.

@NFL Fix yourselves & fast!! Another completely BS roughing the passer call on Clay Matthews. Today's hit that was called was 100% clean & textbook perfect. You people need to stop backing your refs when the F up & need to fix your rules instead of ruining the game.