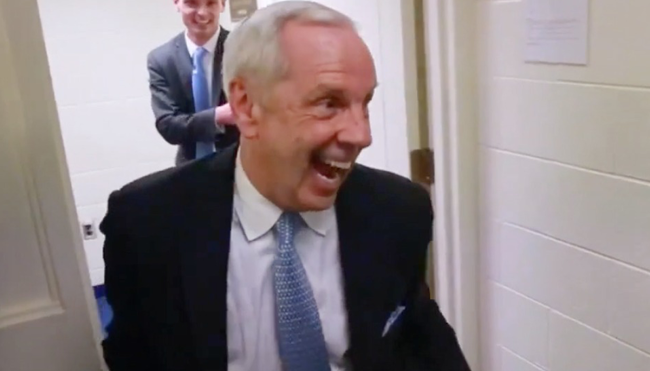 After 18 seasons as the head coach of the University of North Carolina’s men’s basketball team, Roy Williams revealed he’s decided to bring his storied career to an end when he announced his retirement on Tuesday.

After taking the helm at UNC in 2003, Roy Williams helped lead the Tarheels to three national championships thanks to the impressive coaching prowess that resulted in him sporting an incredibly impressive .748 winning percentage during his time at Chapel Hill. After the news broke, high-profile figures around the basketball world paid tribute to the legendary coach, and I’d like to get in on the action by commemorating what he should truly be remembered for: his locker room celebrations.

Williams had plenty of occasions to celebrate due to all of the big wins he helped UNC rack up, and the best part about seeing them secure a victory worth celebrating was knowing it was only a matter of time until we’d be treated to a video of him going H.A.M. with the rest of the team once they made their way off of the court.

Sure, he might’ve been three times as old as the guys on the roster, but if you thought that would stop him from doing things like pulling out the dab after a game, you obviously don’t know Roy Williams.

Getting to witness that unbridled enthusiasm never got old, and I don’t think I’ll ever get tired of watching the clip of him skipping into the locker room like a schoolboy on his way to a candy shop following UNC’s Sweet 16 win over Arkansas in 2015.

However, there is perhaps no better example than the truly iconic moment when he shimmied into the postgame celebration after beating Duke to clinch the top spot in the ACC in 2016.

Williams’ career came to a fairly unceremonious end following an underwhelming season that saw the Tarheels get knocked out of the NCAA Tournament in the first round, but he still managed to treat one last clip of him boogying down before hanging up his clipboard.

I don’t know if Ted Lassodrew some inspiration from Williams, but I’m going to tell myself that’s the case until proven otherwise.

Williams may be gone, but thanks to these celebrations, he’ll never be forgotten.