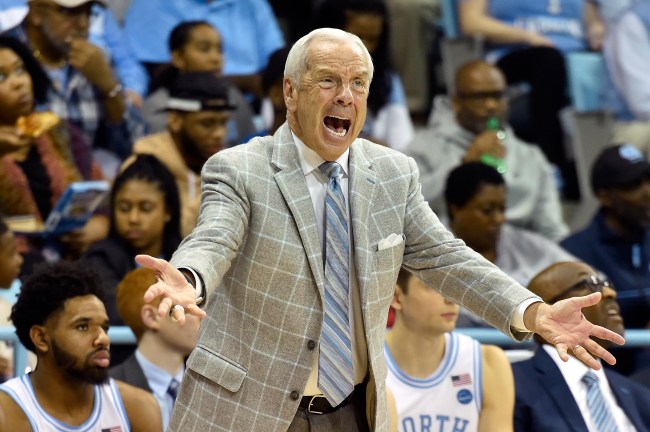 Roy Williams is a Hall of Fame head coach who has won three national titles and coached numerous future NBA players, all while elevating two of the most prestigious college basketball programs in history; the Kansas Jayhawks and the North Carolina Tar Heels. Given his success, it’s safe to say that ol’ Roy has high expectations for his teams, something that his current group of Tar Heels surely haven’t lived up to yet this season.

Following an embarrassing home loss to Georgia Tech the other day — which dropped the Heels to just 8-6 on the season — Roy Williams sure didn’t mince words when voicing his frustration, as the 69-year-old absolutely laid into his current group of players, even going as far as flat-out ridiculing their talent level. Just take a look at what the head coach had to say while talking to reporters following the uninspiring performance, which saw UNC fall behind 19-2 and 27-4 at one point.

UNC fell behind 19-2 and 27-4 in a performance that left Williams the “most upset, most disappointed I’ve ever been in my life coaching a basketball game.”

The Hall of Fame coach, who remains tied with mentor Dean Smith for fourth on the Division I all-time wins list with 879, still seemed distraught about the state of his team speaking Monday night on his weekly “Roy Williams Live!” show, saying the group was “the least gifted team I’ve ever coached in the time that I’ve been back here.”

“We stunk, OK. We were not very good,” Williams said of the loss to the Yellow Jackets. “The crazy thing about it is, our team, and we’ve had some very gifted teams, this is not a very gifted team. It’s just not.”

While the loss to Georgia Tech was miserable, it wasn’t even the Tar Heels’ worst this season, with the team losing to Wofford earlier this year, which leaves Roy Williams’ team in serious danger of missing out on the NCAA tournament for just the second time in the coach’s 17 seasons at the school.

After being ranked No. 9 overall in the preseason rankings, the Tar Heels lost super freshman Cole Anthony to a knee injury, who was tearing it up on his way to averaging 19.1 points, 6.3 rebounds, 3.4 assists and nearly two steals per game. Unfortunately, Anthony isn’t due back anytime soon, meaning Roy Williams has to find a way to get his team to elevate their play without a likely top-5 pick in next year’s NBA Draft. But with the coach’s most recent comments, it sure doesn’t sound as if he believes there’s enough talent on the current roster to do it.