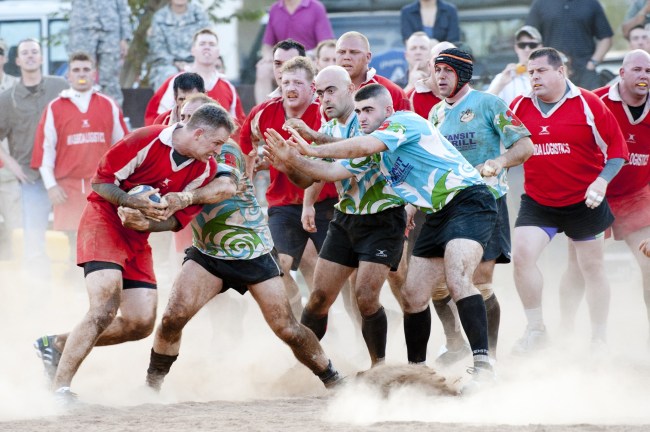 Rugby is an aggressive sport where people are yanking on all limbs at all times, trying to pummel their opponents into the ground. For anyone who has played before knows, it gets really chippy, really fast, and is basically football without the big pads. To say it takes balls to play would be an understatement.

Since rugby has this tough guy mentality to it, there are a lot of things that happen in a match that most fans wouldn’t see in other sports — especially in America where the sport isn’t nearly as popular as it is overseas. One of those things? A player blowing a snot rocket into the face of an opposing player during a scrum, which is just about the most vomit-inducing thing I’ve heard of as a former athlete and, well, just human being in general.

According to Golf Digest, a South African player named Nico Lee from a team called Cheetahs actually did that, though, which cost him 13 weeks due to suspension. Of course there’s video, so take a look below and try not to show your lunch, because it’s a nasty thing to imagine happening, let alone see happening.

As mentioned above, the rugby player, Nico Lee, was suspended 13 weeks by a committee who met after video of the incident surfaced, with the panel releasing a statement into their (obvious) decision to ban Lee.

“It is difficult to imagine how an act of foul play of this sort could be worse,” the disciplinary panel said.

“This is not a case of over-exuberance, or an act which is within the rules of the game going awry. It follows that by its nature this act is one that is deserving of punishment. It is contrary to the spirit of sport.”

There have been some other nasty things that have happened in sports before — like Bill Romanowski spitting in the face of opponent J.J. Stokes during an NFL game years back — but aiming a snot rocket towards an opponent and actually landing it is one that makes me want to barf. Like, seriously, who the hell thinks to even do that? Long live rugby shenanigans, bros.