Russell Okung, The First NFL Player To Be Paid In Bitcoin, Defends His Decision Despite The Crypto’s Wild Price Drop 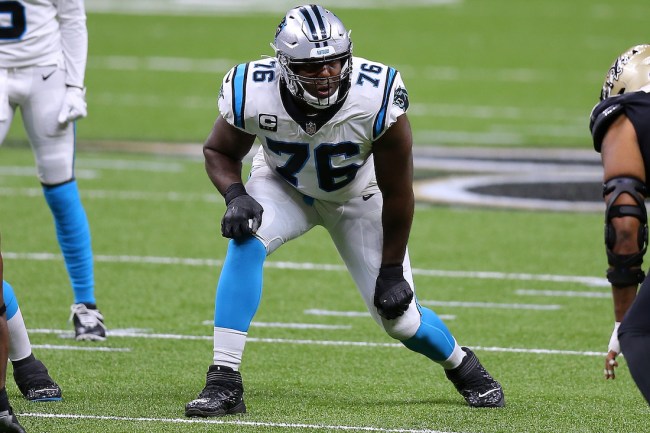 Most of us know Russell Okung for being a pretty good offensive lineman, with the former No. 6 overall pick putting together a solid career since joining the league in 2010. But others may think of another thing when hearing Okung’s name: Bitcoin. Why? Because the behemoth of a man was the first NFL player to ask for his salary to be converted to the cryptocurrency, believing it’d turn into billions down the road.

While nobody’s sure what might happen to the popular (and expensive) Bitcoin stock, after seeing the price drop wildly over the past few weeks, it’s a reminder that the market is… well, volatile.

After Bitcoin’s price hit record highs of $63,500 per coin on April 13 of this year, it suddenly finds itself floundering at “only” $39,500 as of midday Wednesday. You don’t have to be a math major to know that’s a painful $24,000 loss per just one coin. But despite the dramatic price drop, Russell Okung isn’t having any regrets, and, in fact, is doubling down on sticking with the cryptocurrency.

Here’s what the current free agent offensive tackle had to say on Twitter about his decision to ride with the stock, who actually claims he bought more of the crypto’s stock during this dip, hoping it pays off for bigger rewards in the future.

I’m investing more into my future self.

They laugh now but will cry later.

I am not selling my #Bitcoin, ever.

Bitcoin is not only about number going up. It’s a way to structures ones life to achieve independence and full autonomy.

My wife has never been through a swing with Bitcoin. She is true ride or die.

Her first words this morning: pic.twitter.com/UtQPZirsj2

Cashing out on Bitcoin is losing money.

It’s almost as if Russell Okung invented Bitcoin or something, given his loyalty to the cryptocurrency. But considering he has millions of dollars dumped into this one specific stock, he better be willing to overcome some adversity with it — and, hopefully, he comes out on the other end without losing too much or all of his money.

Okung isn’t the only NFL player who has shown some emotion regarding the Bitcoin stock dropping over the past month, as Patrick Mahomes also tweeted out his reaction to the reality that the cryptocurrency is really struggling at the moment.

BREAKING: Cryptocurrencies plummet across the board; Bitcoin down 28%, Ethereum down 40%, Dogecoin down 43%

Nobody knows for sure what will happen in the short- or long-term when it comes to Bitcoin’s stock or, really, this whole cryptocurrency trend. But if Okung’s gamble pays off and the price recovers to, say, $75,000 or more over the next few years, his decision to double down will obviously be a wise one. Remember, you can’t win or lose if you don’t even enter the race, so good on the NFL player to stick to his guns and ride this thing out — assuming the stock price recovers.