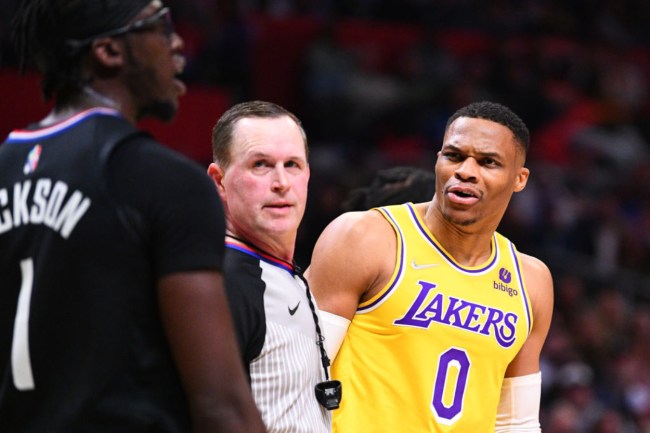 They’ve now lost three straight games to fall out of play-in position for the upcoming NBA Playoffs. The Lakers now sit at 11th, but they’ll need to place 10th or higher in the Western Conference standings to have a shot at the postseason.

There’s still a path, as LA sits just a game behind New Orleans for ninth, but with just seven games remaining on the schedule, the Lakers need a strong finish.

The latest defeat came at the hands of the Dallas Mavericks.

It was an 18-point blowout in which the score actually looked much closer than the game itself. The Lakers allowed 82 points in the first half, falling behind by nearly 40 points in the third quarter.

Los Angeles was without LeBron James or Anthony Davis for this matchup, leaving Russell Westbrook to shoulder most of the blame.

Westbrook was actually one of the team’s top performers, racking up 25 points on 53% shooting. He added eight boards and six assists to lead the Lakers in both categories.

Unfortunately, it wasn’t nearly enough to land a win.

Westbrook fielded questions about the loss and the future of the season following the game’s conclusion.

With this year beginning to slip away, one reporter offered a simple solution for the Lakers moving forward.

During the postgame press conference, Russell Westbrook was asked what needs to change for the team as the postseason nears. It began a back and forth between the guard and a Los Angeles reporter.

Russell Westbrook had an altercation with a reporter and walked out of his postgame interview 😳pic.twitter.com/iIz6vNHsx8

Westbrook then asks the reporter what he believes should change.

Yes, that is an obvious fix.

The Lakers’ guard didn’t take kindly to the answer, stepping away from the podium. He then got into an exchange with the reporter.

“Winning? That’s obvious. Do you have the answer to winning?”

The back and forth goes on for a bit before Westbrook calms down and leaves the room. The response is probably a combination of frustration with the loss and the oversimplified solution to the Lakers’ season.

Westbrook has been the focus of criticism throughout the year, and with the NBA Playoffs now in doubt, temperatures are boiling over.

We’ll see if the Lakers can find the answer to winning over the last two weeks of the season. If not, they may be sitting home come April.