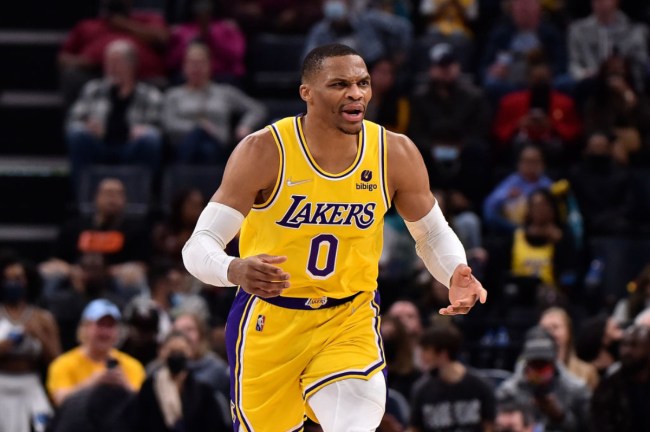 The new year has not been kind to Lakers’ guard Russell Westbrook. He’s averaged just 12.4 points per game in the five games played in 2022 while shooting a whopping 29.3 percent from the field.

His struggles continued in a major way on Wednesday night in Sacramento as he went just 2-for-14 from the field. Westbrook went 2-for-12 from the floor in Los Angeles’ previous game as well, a loss on the road to the Grizzlies.

Frustrations are clearly boiling over for Westbrook and the Kings’ decision to troll him during his abysmal shooting night isn’t something he appreciated all that much.

The Kings played short snippets of ‘Cold As Ice’ by Foreigner when introducing Westbrook ahead of the game and at various points throughout the contest. Westbrook was exactly that, as cold as ice, but he still called out the Kings for being “cute” during his postgame press conference.

“That’s funny. I hope they played that the last 14 years, too,” Westbrook told reporters. “It’s funny they play it now. That’s cute.”

This was hilarious! Westbrook talking about his shooting slump and the in-arena DJ in Sactown playing "cold as ice": "I hope they played that the last 14 years, too. It's funny they play it now. It's cute [laughs]." pic.twitter.com/pBpIKUNLh0

One could argue the only thing cute about Wednesday night was Westbrook continuing to chuck up bricks and registering just eight points in 37 minutes of action.

The Lakers’ decision to acquire Westbrook in a blockbuster deal hasn’t exactly paid off, nor has their decision to go with a roster of older playeres.

Los Angeles is 21-21 on the year and currently sits in the eight spot in the Western Conference standings. Anthony Davis missing time with injuries certainly hasn’t helped, but this Lakers team hasn’t been able to consistently look anything close to a true contender at any point this season.