America, Once Again, Lands Devastating Blow On England As Russell Wilson Is Set To Start In London On Sunday 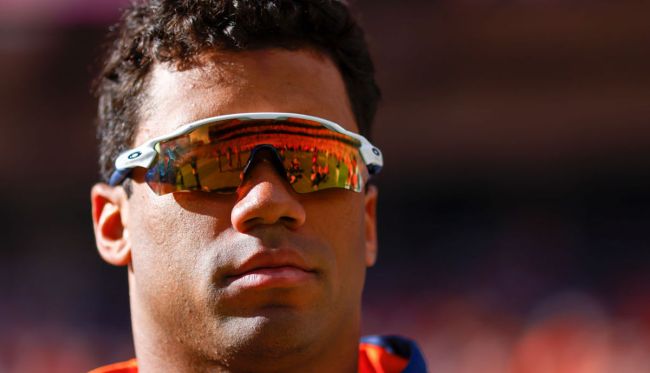 Perversely, and somewhat predictably, despite his attempts to cultivate an image as the ultimate Good Guy, Denver Broncos quarterback Russell Wilson currently finds himself as being perhaps the league’s most prominent villain, as even kickers are making fun of him these days.

And unfortunately for England, he’s about to be exported to their lands on Sunday, as Broncos head coach Nathaniel Hackett says the struggling QB will start when Denver takes on the Jacksonville Jaguars in London.

Hackett noted that Wilson was a full participant in the last session of the week. Wilson was limited on Wednesday and Thursday. Hackett also said there was some thought to holding Wilson out on Sunday given that the Broncos have their bye next week to give him extra time to heal. But that apparently wasn’t given too much consideration. [via ProFootballTalk]

Wilson’s struggles so far this season have been well-documented, as the 33-year-old signal-caller has endured a difficult start to life in the Mile High City.

Through seven weeks, the Broncos find themselves at the bottom of the AFC West with a paltry 2-5 record, which almost surely puts them out of the race for the division title with the Kansas City Chiefs currently sitting at 5-2. If the Broncos are going to make the postseason at all, they’re going to have to start by winning on Sunday as there are currently 10 teams in the AFC that have a better record than them. Wilson, in particular, is having a rough go of it as the former Super Bowl winner has completed just 58% of his passes for 1,442 yards, five touchdowns, and three interceptions.

Compounding his on-the-field issues is Wilson’s unrelenting off-the-field corniness, as reports from this week indicated that Wilson was working out during the team’s plane ride to London, which is a move that got him thoroughly roasted on Twitter:

Russell Wilson for four straight hours on the plane pic.twitter.com/jng3CNdoGF

Russell Wilson in the aisle of the plane for four (4) hours pic.twitter.com/xRe5tJNx1m

Russell Wilson while everyone is asleep on the plane

russell wilson in the middle of the aisle: pic.twitter.com/pTMlrKiUpI

Russell Wilson on the plane while everyone sleeping
pic.twitter.com/dq1UiLCCwY

me waking up on the plane when I hear Russell Wilson reciting the Bible at 90% volume pic.twitter.com/GKLOVzANTM https://t.co/re1LdcalZ1