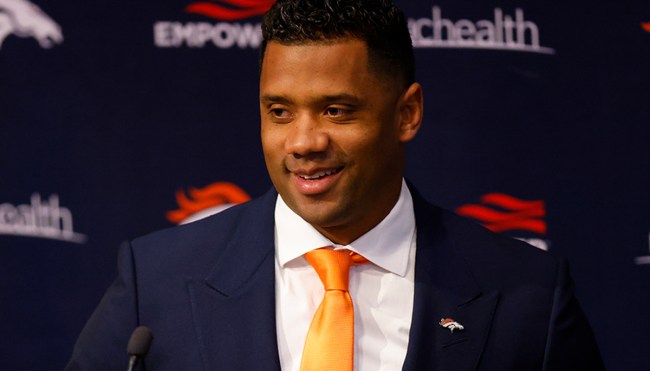 A lot of Broncos fans were less than thrilled to hear Aaron Rodgers had decided to remain in Green Bay following plenty of speculation he could take his talents to Denver, but it didn’t take long for them to get a consolation prize after the team pulled off a trade for Russell Wilson shortly after the Panchakarma enthusiast announced he was remaining with the Packers.

The move was certainly an upgrade for a fanbase that was dreading another season featuring Drew Lock as their best option at QB, and while it would appear the Broncos emerged as the winners in the deal, there are still plenty of questions surrounding the 33-year-old who’s slated to start under center for Denver this season.

However, it would appear there’s one person who’s very high on Wilson based on what they’ve seen so far: offensive tackle Garett Bolles.

Bolles made a pretty bold promise when he reached out to Wilson on the day he was traded, but he may have outdone himself while describing the impression his new QB has made since joining the Broncos.

While speaking with the media on Thursday, Bolles issued some very high praise when he deployed NBA greats including Michael Jordan and Kobe Bryant to describe Wilson’s mentality.

Broncos OT Garett Bolles on Russell Wilson: “You talk about some of the greatest athletes—Kobe Bryant, LeBron James, Michael Jordan—the type of mentalities those athletes have—that’s what he has. He’s so focused all the time, ready to rock and roll, and it’s what we needed here.”

While Bolles may have only been referring to one aspect of Wilson’s skill set, comparing a guy who’s won a single championship over the course of his 10 years in the league sport to undisputed legends who both secured a threepeat during their first decade as a pro is a pretty wild move.

I guess there’s a chance Russ will be able to cook better than ever at high altitude, but I guess we’ll just have to wait and see.