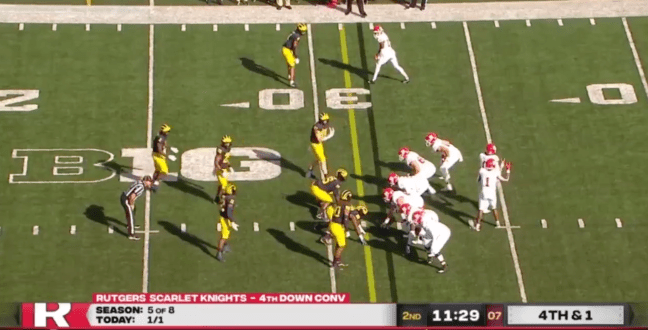 Rutgers football appears to be on the right track with Greg Schiano took as head coach. The Scarlet Knights went from a perennial basement dweller to an inferior opponent that you teams have to prepare for in year one.

However, despite their slight improvement, they faced a reality check against Michigan and fell behind 17-3 at halftime. It served as a great reminder that Rutgers is always going to Rutgers.

Facing a 4th-and-1 from the Wolverines’ 31-yard-line, Schiano elected to go for it. To do so, he dialed up a truly terrible trick play.

The Scarlet Knights got to the line and quarterback Noah Vedral pretended to look confused toward the sideline as the play clock dipped below five seconds. Around the three-second mark, running back Isaih Pacheco hurried to the line and took the direct snap.

He fumbled, recovered, ran back to the line of scrimmage and was brought down for a slight loss. Rutgers did not convert and Schiano’s face after the failed effort is priceless.

Rutgers went for some trickeration on 4th down.

Had Pacheco known, he could have turned around and walked in for a touchdown. Obviously, after fumbling, that was not his first thought and it was full panic mode.

Even if Pacheco was able to hold on to the snap, the play would likely have failed. Rutgers’ offensive line got very little push and Michigan was swarming.

Perhaps next time, Schiano will just hand the ball off to his running back up the middle.