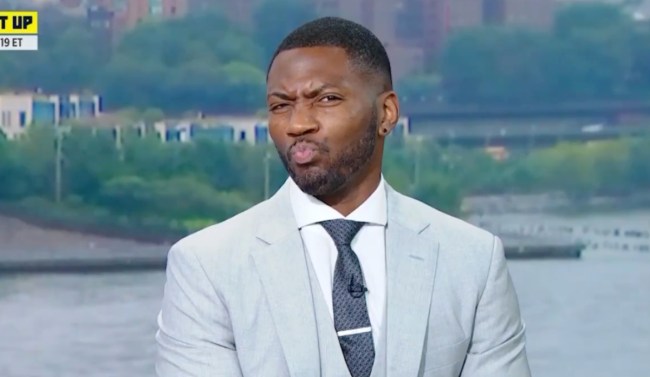 Ryan Clark is fed up with talking about Aaron Rodgers. In fact, he’s so sick of talking about Rodgers that he thinks ESPN should just stop talking about the Green Bay quarterback altogether.

Not talking about the reigning NFL MVP and arguably the most talked about player in the entire league seems like a bold strategy for a sports network and NFL analyst, but that’s the route Clark wants to take.

Clark made it very clear that Rodgers’ cryptic Instagram post on Monday got under his skin. The former NFL safety turned ESPN analyst went on quite the rant during Tuesday’s edition of ‘Get Up‘ explaining why the media (ESPN and others) needs to stop letting Rodgers control them.

“I’m not doing this with y’all, man. I’m not. I did it for seven months last season, and then he showed up to freaking training camp on the first day with a Kevin from The Office shirt on,” Clark began.

Clark then offered up some unique phrasing about how Rodgers finds himself intelligent and engaging before calling everyone “dummies” for continuing to talk about the Packers’ QB.

"Every time he does something, we dummies engage! … He's also now become somewhat of a media darling, whether it's because you love him or you hate to hear him, we all listen. … We need to stop letting him control us!" pic.twitter.com/ynVnLOnC6B

We have to get out of this world when every time someone does something on social media we try to figure out if he’s going to play football…He sends out the message, we have no idea what it means. Aaron Rodgers is going to control Aaron Rodgers, we need to stop letting him control us.”

Unless Rodgers flat-out comes out and says he’s retiring or returning for another season soon, Clark is in for a long NFL offseason filled with Rodgers talk. Talking about the reigning MVP, a guy that moves the needle, and one of the best QB’s to ever do it is part of the job, even if you’re sick of doing it.