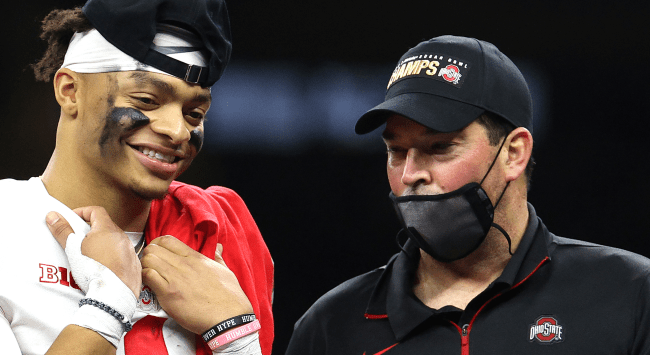 Ohio State head coach Ryan Day has heard some of the criticisms of Justin Fields, the quarterback who led the Buckeyes to an impressive 20-2 record, and he’s firing back in a show of support.

Last week, ESPN analyst Dan Orlovsky said he had heard that NFL teams were skittish on drafting Fields because they aren’t confident in his work ethic, calling him a “last-guy-in, first-guy-out type of quarterback.”

On Saturday, Day spoke with NBC’s Peter King, and tried to quell any of those concerns.

“The whole idea that he doesn’t have a very good work ethic?” Day told King. “I mean, to me, that’s crazy. He got done with the Clemson game [the loss in the college football playoffs in the 2019 season] and he came back and all he did was work to get back to that game. And when those other guys are opting out, what’s he do? He petitions to have a season. He put together this petition that the Big Ten athletes all signed saying that they want to play, but they want to play safely and that they don’t accept canceling the season. It was all led by Justin Fields.”

Day should have just stopped there. But he didn’t.

“Where was everybody else? Where were the guys who were opting out then? You know, you don’t love the game if you’re doing something like that. This kid loves the game.”

So, according to Day, Buckeyes players who opted out of the season because of a ongoing GLOBAL PANDEMIC don’t love the game?

In his interview with King, Day also said, “I think some people are being a little reckless with their comments.”

Needless to say, that statement isn’t going over very well with many college football fans.

Separate from Fields, this is a pretty gross quote from Ryan Day taking a shot at players who opted out last season. pic.twitter.com/rbrCe3lISC

Ryan Day really couldn't find a way to defend Justin Fields without (tone-deafly) throwing other kids under the bus? https://t.co/UKVTFOK6bb

Yeah I love Ryan Day but this is flat out horrible https://t.co/FcrvU4nv3k

Hey Ryan Day, People only have one life to live. Football is all well and good but deciding to sit out for health reasons doesn't mean one doesn't love the game. https://t.co/OPz2jUHOf6

Ryan Day going full ThEy DoN't LoVe ThE gAmE is as predictable as it is disappointing.

Other things in life matter besides football and last season was uncharted territory. Criticizing 18 to 22-year-olds for opting out of college football during a pandemic is a bad look.

Definitely not a great look for Coach Day.