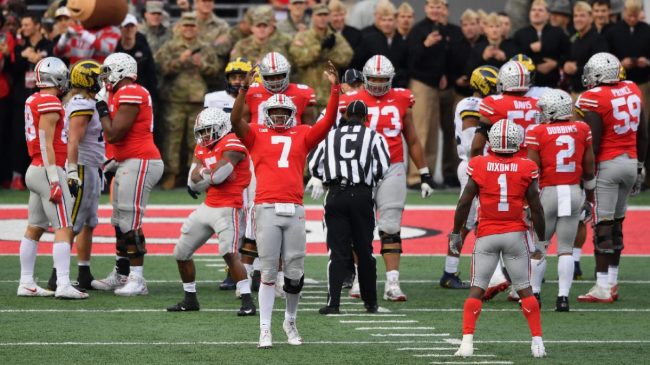 Haskins was struck by a car early Saturday morning while trying to cross lanes on a major South Florida highway. He was just 24 years old.

Word of Haskins’s death sent waves around the sports world.

On Monday, his former college program addressed his passing, with head coach Ryan Day taking a moment to comment on the devastating tragedy.

“It’s hard to wrap your mind around something like this, when it just happened so tragically to a young person, especially to somebody who had such a big heart.

Day went on to speak of the legacy that Haskins left on those around him, which he notes is even more impressive at his young age.

The Buckeyes head coach said that the quarterback will be honored at the upcoming Spring Game in Columbus.

Day isn’t quite sure what the honor will look like at this moment, but he notes the importance that Haskins had on his own career.

He admits that he might not be the head coach at Ohio State if not for Haskins’s performance with the Buckeyes. Day was the offensive coordinator under Urban Meyer prior to accepting the head coaching role.

When asked about Saturday’s Spring Game honor, Day said, “We’ll make sure we do things the right way.”

It’s one of many respects that teammates and former coaches are sure to pay over the coming days.

Kickoff is set for noon on April 16. The contest will be televised on the Big Ten Network. Haskins won’t be forgotten by the Buckeye faithful.