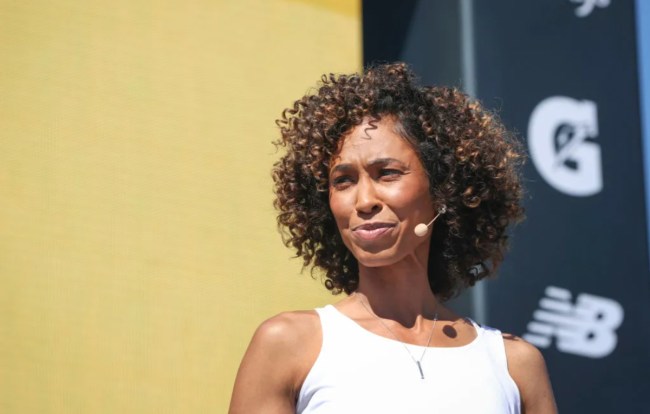 Earlier this week we learned that SportsCenter anchor Sage Steele is suing ESPN and its parent company, Disney. Steele alleges that her right to free speech was violated after specific comments she made on Jay Cutler’s podcast in September of 2021.

Now, specifics of her lawsuit have been revealed, and ESPN analyst Ryan Clark is mentioned by name.

Clark did not suffer any sort of penalty for his actions, according to the lawsuit.

Steele made headlines following her comments on Cutler’s ‘Uncut’ podcast last fall. During her appearance, the 49-year-old shared that she had recently gotten the COVID-19 vaccine to keep her job.

Disney, ESPN’s parent company, issued a mandate that all employees must be vaccinated against the virus. Steele called the mandate “sick” and “scary” on the podcast.

“I respect everyone’s decision, I really do, but to mandate it is, sick, and it’s scary to me in many ways,” Steele told Cutler.

“But I have a job, a job that I love, and frankly, a job that I need, but again, I love it. I’m not surprised it got to this point, especially with Disney, a global company…but it was actually emotional.”

Steele also touched on political and social topics during her appearance on the podcast and made a comment about former President Barack Obama’s decision to identify as black and not biracial.

She was on the receiving end of quite a bit of criticism. The suit alleges that ESPN benched her for a period of time following her comments and forced her to issue an apology.

Steele is expected to remain on-air amid the lawsuit and according to the New York Post, her current contract is not up for “a while.”