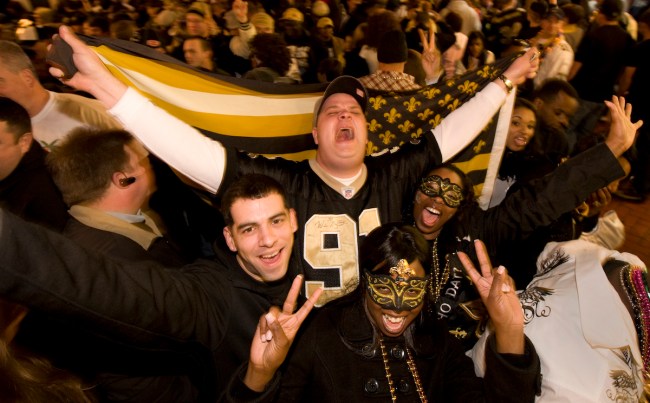 The Patriots and the Rams faced off in Super Bowl LIII in Atlanta last night, and while I’d love to say it was a phenomenally entertaining game that gave fans everything they wanted and more, nothing could be further from the truth.

The matchup—which was the lowest scoring contest in Super Bowl history— was a defensive battle with a laughable number of punts and a notable lack of highlights (unless you get your thrills watching kickers repeatedly pin the ball inside the 20).

Last year, over 100 million people tuned in to watch the Patriots take on the Eagles, and while it’s unclear how many viewers saw last night’s broadcast, I’m going to assume a solid chunk of them wish they hadn’t.

However, there was one sizeable (and lucky) contingent that didn’t have to sit through four excruciating quarters to watch the Patriots do what most people expected the Patriots to do.

Two weeks ago, the Saints got boned out of a Super Bowl birth thanks to one of the most blatant no-calls these eyes have ever seen.

Fans of the team coped with the loss in a number of ways—including filing an ultimately useless lawsuit against the NFL—and a number of supporters pledged to spend Super Bowl Sunday doing everything in their power to avoid the game.

In hindsight, I wish I had joined them.

Salty fans took to the city’s streets early in the day to futilely rage against the no call and it was only a matter of time until the protest turned into a party.

Saints fans wave yellow flags as they second-line at the NOLA No Call protest on the riverfront pic.twitter.com/jMTHRjNlCd

At another anti-Super Bowl party on Magazine St., AJ and Jennifer Herbert dressed up as penalty flags. (Photo by @MichaelDeMocker) pic.twitter.com/UsetALRNkh

Of course, this is New Orleans we’re talking about, so it was only a matter of time until the protest turned into a massive party that was almost certainly more enjoyable than whatever you did last night.

#Saints fans turn their anger into a reason to party ⚜️ #BestFans pic.twitter.com/iPu583mQVe

The refs might have made the wrong call but those people definitely made the right one.