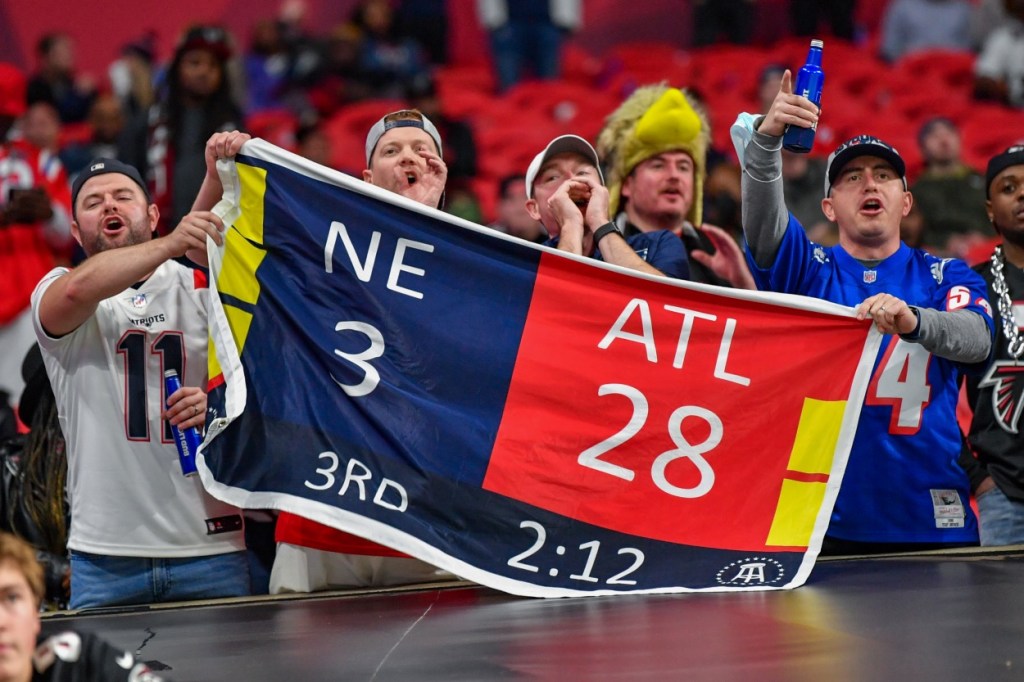 Football is full of rivalries. Teams can be geographic rivals (Jets and Giants, Niners and Raiders), historical rivals, divisional rivals, and all of the above. These rivalries and the constant power shift between them make sports infinitely more enjoyable for fans.

Everyone knows that story, the 28-3 collapse. Brady and the Patriots went into halftime losing 28-8 but overcame the 25 point deficit to win 34-28 and Tom Brady was named MVP. Since then, ’28-3′ has become the most used jab at Falcons fans and it’s something that will plague Atlanta’s fans forever.

Based on a viral tweet (below) and a message board post, it appears the Saints put up a ’28-3′ sign in the Superdome to promote their new super-fast escalators.

I hope that’s real. The pettiness is incredible. But that picture is soooo pixelated I’m 50/50 on it being real. It won’t be shocking at all if it’s a photoshopped picture.

That viral tweet took off and the replies from Saints fans are loving the jab at the Atlanta Falcons:

Getting Saints fans to their seats fast enough to see that Jameis pick on the opening drive.

Every single comment on the message board post linked above echoes this sentiment. People hate that they explained the joke but some wonder if it was done for dubious legal reasons.

I liked it until they explained the joke. IYKYK.

If the Buccaneers aren’t NOLA’s rival than why do they so desperately want to beat the Bucs every season and celebrate beating Tampa like they’ve won the Super Bowl?

Why do Bucs fans always try and get involved? you aren't our rivals, the Falcons are. Go away 😂

Saints were 0-2 vs the falcons that year btw

Even if the Atlanta Falcons go on to win a handful of Super Bowls one day they’ll still never live down the ’28-3′ collapse. It’s part of their franchise forever now. I don’t make the rules.