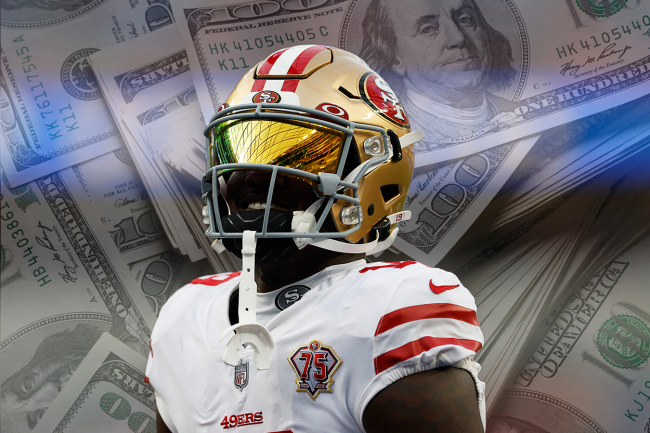 The ongoing situation saga between Deebo Samuel and the 49ers is the latest in a long, wild NFL offseason. As things currently stand, Samuel’s future in San Francisco is up in the air and his latest contract offer is insulting.

Throughout the 2021 NFL season, the 49ers used Samuel in a very unique role. The entire offense ran through the 26-year-old South Carolina alumnus, whether as a pass-catcher or a ball-carrier.

As a result of his usage, Samuel coined the term “wideback,” referring to how he plays both wide receiver and running back. Apparently, after some time to think about how he was used last season, he has changed his mind.

Over the course of the last week or so, things have devolved between the two sides even more than ever. Samuel wants a new contract and San Francisco is willing to pay him, but the most recent number is low and the wide receiver is reportedly more concerned with how he is being used than money.

The back-and-forth has gone on for a few weeks now, but the last few days have seen the situation take a very negative turn.

It appears as though the 49ers will either have to rework their role for Samuel, pay him a small fortune, or trade him.

Based on a new report from Pro Football Network’s Tony Pauline, it sounds like the team wants to go the contract extension route, but isn’t willing to pony up. He reported that Samuel’s most recent offer was in the $19 million range.

"Multiple league sources tell me the Niners put a baseline contract offer on the table for Samuel, which averages just under $19 million per year."@TonyPauline has the latest he’s hearing on the Deebo Samuel situation.#PFNReport | #49ers https://t.co/BIeHj331O3

Now, that might seem like a lot of money, because it is. However, when compared to other players around the league, it is insulting.

Earlier in the offseason, Christian Kirk landed a four-year, $72 million deal with Jacksonville that included $37 million guaranteed upon signing. That has set the wide receiver sticker price at an astronomically high level and it is making things hard for franchises like San Francisco to sign their guys.

If Kirk is worth that much money, then how much is Samuel — who accounted for more than 25% of the 49ers’ total yards last season — worth? Probably a lot more than Kirk. According to multiple reports, Samuel is asking for at least $25 million per year.

It will be curious to see how things play out in the Bay area. Stay locked HERE for all of the latest updates.