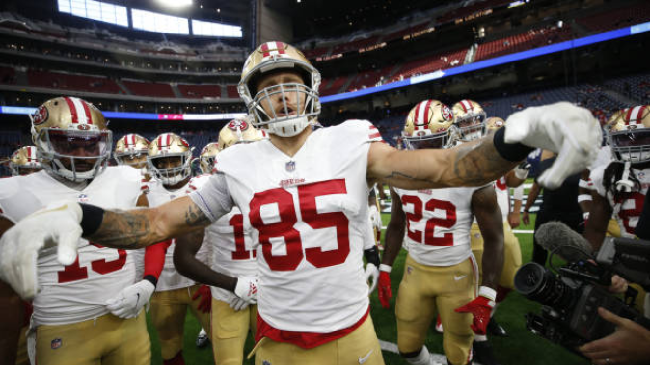 This Sunday is a big day for the San Francisco 49ers. While a trip to Chicago to play the lowly Bears might not usually seem like a particularly meaningful game, even in a season opener, this weekend is an important one for the 49ers.

On Sunday, the 49ers will officially put their franchise’s future in the hands of Trey Lance.

There’s a lot of pressure on Lance to succeed immediately with the 49ers having just made the NFC Championship Game last season. Now it seems like his task could be even tougher than expected.

According to PFF’s Ari Meirov, star tight end George Kittle missed practice today for the 49ers, raising concerns about his availability for Week 1.

#49ers TE George Kittle is dealing with a groin injury and will not practice today. He's day-to-day.

Kittle is one of the league’s top tight ends and a key piece of the 49ers offense. When healthy, he has regularly been one of the top two targets for this team alongside Deebo Samuel.

Kittle has a couple more practices to upgrade his participation, but it is concerning to see him already popping up on the injury report after he missed 11 games over the past 2 seasons.

If Kittle doesn’t play, Lance will need to lean on Brandon Aiyuk to make up for some of Kittle’s missing production and we could see Lance use his legs a bit more than expected.

It’s a situation to monitor for the next couple of days for both football fans and fantasy owners who will now both have to wait and see whether one of the league’s best tight ends will be available for the first game of the 49ers’ season.