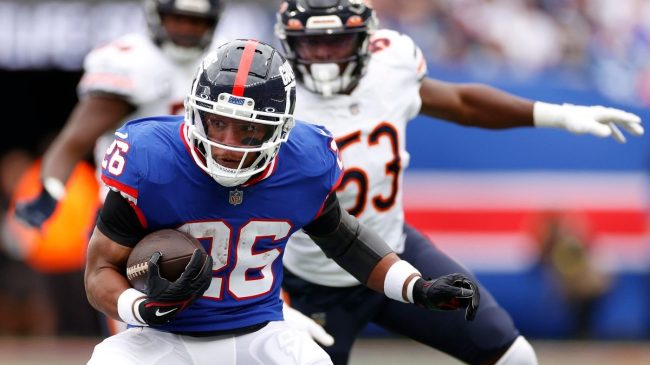 The New York Giants have been decent this year, but there are still plenty of questions regarding the roster. On Sunday, the quarterback situation became dire, as both Daniel Jones and Tyrod Taylor fell to injury. For that reason, head coach Brian Daboll had to make an executive decision on who would fill in and he called Saquon Barkley’s number.

That’s right. New York didn’t have any viable options at quarterback so Brian Daboll lined up Saquon Barkley in the position. The Giants were forced to run the wildcat offense for a short time before Daniel Jones eventually returned to the lineup.

With Daniel Jones and Tyrod Taylor out, Saquon is QB3 😅 #CHIvsNYG pic.twitter.com/jNFQZfOUbQ

This is a less-than-ideal situation for the G-Men. Daboll likely would have preferred to have Taylor play much longer. However, his injury put the Giants in a tough spot. At least Jones was able to return to keep the offense rolling. Even so, it was kind of exciting to see Saquon Barkley take over the huddle.

Despite the injury concerns, New York finds themselves 3-1 in the NFC East. Brian Daboll has completely changed the culture of this franchise as they’re in the running for a playoff spot early in the season. Saquon Barkley seems to be back to his normal self, as he’s been elite in nearly every game this year.

The injuries will be something to monitor ahead of Week 5. Due to the fact, Daniel Jones was able to finish the game, there is reason to believe he’ll be good to go. However, if he and Tyrod Taylor fail to be healthy for the next matchup, we might see Saquon Barkley under center for an entire contest.