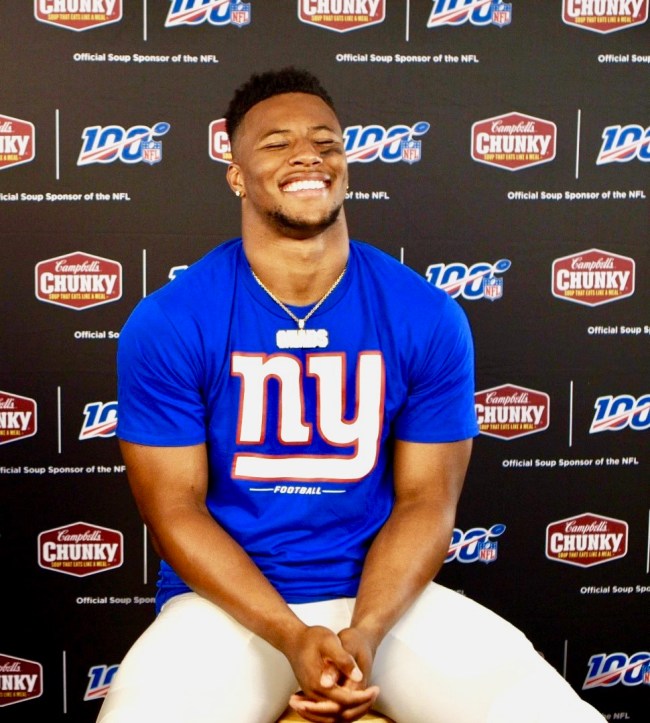 Here’s the thing about Saquon Barkley’s QUADS chain: It’s so shiny, it’s impossible to get a good picture of him wearing it with an iPhone under the lights of a commercial shoot in Los Angeles. The hardware, famously gifted earlier this summer from Baker Mayfield after Saquon won NFL Offensive Rookie Of The Year, shimmers brilliantly as camera and production crews shuffle around him.

S/O to @bakermayfield for coming through with the bet 😂😂😂 #QUADS pic.twitter.com/19dYtk8Kly

On the day I met Saquon Barkley in a media room at Banc of California Stadium, he was wrapping up filming for an upcoming Campbell’s Chunky Soup commercial spot.

“You know how the bet [with Baker Mayfield] was a chain? Well mine was gonna say “DANGEROUS” – It was going to be dangerously expensive,” he smirks. “In reality, the dangerous thing is that he picked QUADS.”

The day before, Madden 20 ratings came out, ruffling some feathers with his controversial 91 overall rating.

“Sterling Shepard at an 81?! That just blows my mind. And I’m not gonna talk about me…” 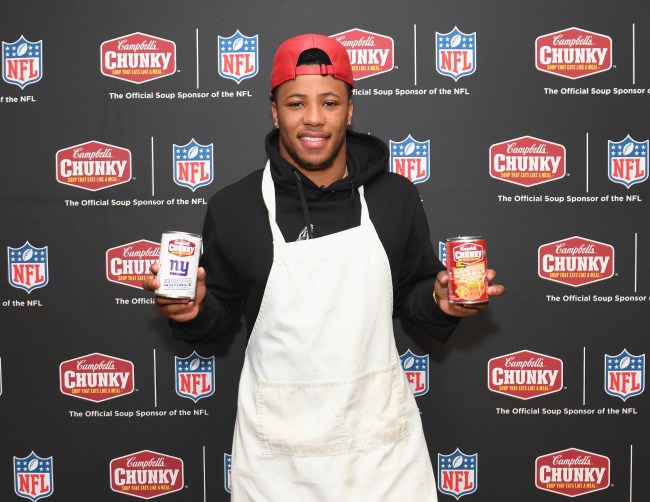 Barkley adds, “There’s a lot of things where, you know, I don’t personally agree with it. But like I said, for me personally at the end of the day the way I view it is I’m in the game, you know? You grew up and you wanted to do that.”

“I don’t play Madden anymore anyway or when I do play Madden I don’t use myself, anyway, cause if I mess up I take myself out the game. So I stay away from that.

“But, like I said, 91 overall? I’ll take it and I just gotta prove I’m better than that. And like I said, one day I’m gonna be on hopefully a goal of mine to– God willing, to be on the Madden cover one day.”

Saquon Barkley is the face of Campbell’s new “Champions of Chunky” advertising campaign, an evolution of the classic “Mama’s Boy” commercials. Saquon stars as a “Mama Boy” for the 2019 – 2020 season, co-starring in the spot with his mom, Tonya, interrupting two team huddles with a bowl of Campbell’s Chunky Soup.

The Campbell’s Chunky spot is a modern twist on a beloved commercial tradition started back in 1997 by Reggie White and his mom, famously sneaking down to the sidelines to make sure that Reggie is fueled up on Campbell’s Chunky Soup.

After all, every can of Campbell’s Chunky packs 10-plus grams of protein and veggies.

Campbell’s Chunky has revisited the spot many times over the generations, including with John Elway, Donovan McNabb, Clay Matthews, and Victor Cruz. It’s a bonafide football season classic, hitting right in the heartstrings harder than a defensive tackle ever will.

What’s better than celebrating the moms, dads, grandmas, and others on the sidelines of life that encourage us to perform at our very peak selves?

So what’s it like for her to watch him play football?

“Now she’s comfortable. The first couple of years when my mom started watching me play football, you see people out there basically trying to kill your son. I don’t think that sits too well on the mother’s stomach. But now, you know, even still, you know, if I get up slow after a play or something like that, my mom tell me that she’s cursing at the sideline from the bleachers.

But you know, I would say, yeah, definitely the first five years have been tougher. But now, especially in the NFL you see your son living his dream that he’s always wanted to since a kid.” 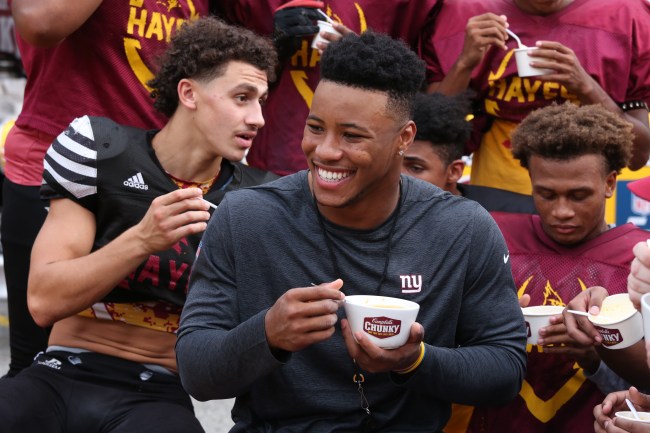 And what was the Campbell’s soup that your mom brought home back in the day?

I ask about what it means to have family alongside such monumental career milestones.

“It wouldn’t have just been my mom,” Barkley glows. “it would be all my family members at the Draft.”

“You know, would I go back and do to draft again? No. Because the media and everything after that, I was like, there for three hours. I don’t want to do that part again.”

“But to experience hearing my name called– not even hearing my name called, to see that phone ring and know it’s a New Jersey number and that I’m staying home, pretty much. See the smiles on my dad and my mom’s faces, look at– down the table and all the people that I cared about the most, besides my one boy. He wasn’t there yet, but besides that.

“But having all them there made the moment so much special. And to get up and hug my dad and hug my mom and see the smiles on their face. And to go up there and hold that jersey and with my last name on hand representing my family probably be the most special moment so far.”

With one year under his belt in the NFL, how does he Saquon lean back into the focus and confidence he found at Penn State?

Just go be me. I feel a lot of times a lot of people try to be something that they’re not and I was just trying to make sure that I stayed true to who I am. And that’s what’s going to sell and that’s what got me here so why not stick with that?”

At this point, I have to break any sort of journalistic objectivity to interject a Penn State question. An inquiry, more-so. As a grad, have to go there.

“Ahhhhhh,” he sighs happily. It’s a blissfully recognizable sigh for every Penn Stater thinking about their favorite ice creams from the school’s historic Berkey Creamery, which has been churning out ice cream from central Pennsylvania’s dairy farms since 1898. 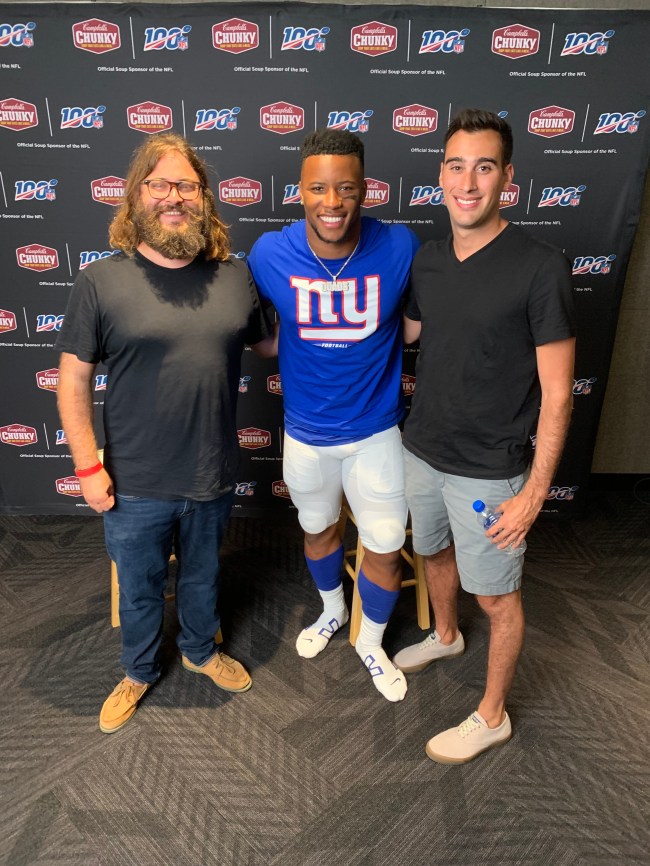 This is a big no-no in Penn State circles. As lore goes, only one person in the 100+ years of the Penn State Creamery has ever mixed flavors – President Bill Clinton when he delivered a commencement address at Penn State in 1996. To this day, no one’s sure why he got a pass.

“I just want two because only one person’s ever got two different scoops together.”

“So like, that’d be dope like, to be the second person ever. I don’t think that’ll ever happen but like, I don’t know what you actually have to do because like, the only person who ever did that was like, a president.”

“Me personally, I don’t think I have any plans for ever running for president in my life. But you never know!”

“I don’t know what it’s gonna take but that would be pretty dope to say I’m the second person ever to get two different scoops at the Penn State Creamery.”