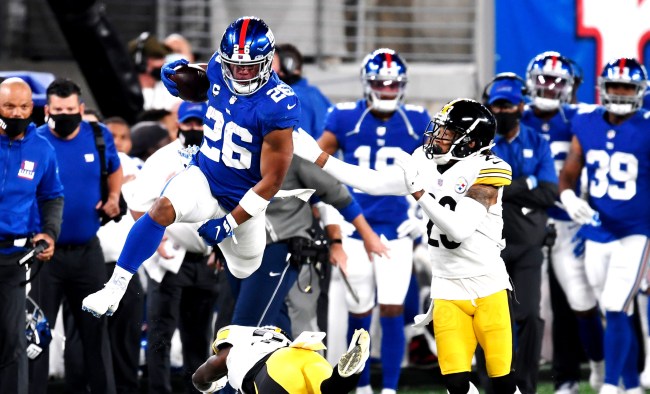 The other day, former New York Giants great Tiki Barber said that despite current Giants running back Saquon Barkley having already scored 23 touchdowns and over 3,500 yards rushing and receiving during his first two seasons, he might “not be an every down back.”

“Saquon Barkley might not be an every-down back. He cannot pass protect, and it is starting to become glaring,” Barber said during the Tiki & Tierney show this week. “It was probably the only issue he had to deal with coming into the NFL. He wasn’t asked to do it at Penn State. And you see him diving on the ground, not sticking his head in people’s chests. It’s gonna be a liability, because people see it now, it’s on tape, and it’s gonna come out. If you’ve watched him for the last couple of years, he doesn’t want to block.”

Harsh criticism to be sure, but is Barber wrong?

Had to do a deeper dive after @TikiBarber comments. So …

All 12 plays Saquon Barkley was asked to pass block on Monday night. Some good, some bad and a really ugly. #Giants pic.twitter.com/oP8IGTCpqE

Naturally, Barkley was later asked about Barber’s comments and whether it bothered him.

“No. It does not,” Barkley said, reported Ralph Vacchiano of SNY. “To be completely honest, no disrespect to anyone, I truly don’t care about other people’s opinion. Guys on my team and in this building won’t question my to ‘ughness.’

Saquon Barkley on bouncing back from his awful game: "It happened. I had 15 carries and six yards. Guess what? I came to work with a smile on my face, ready to work and get better."

Zack Rosenblatt of NJ.com reported that Barkley said, “I’m not gonna look at it as disrespect. I’m gonna look at it as a challenge. But it’s the same thing with him as everybody else: I don’t care about anybody’s outside opinions. I’m really only focused on the opinions in this building. I try to come to work every single day and get better.”

"It's easy to be an all-pro clicker"

Saquon Barkley on people criticizing his play and toughness pic.twitter.com/ZASu5RzPJs