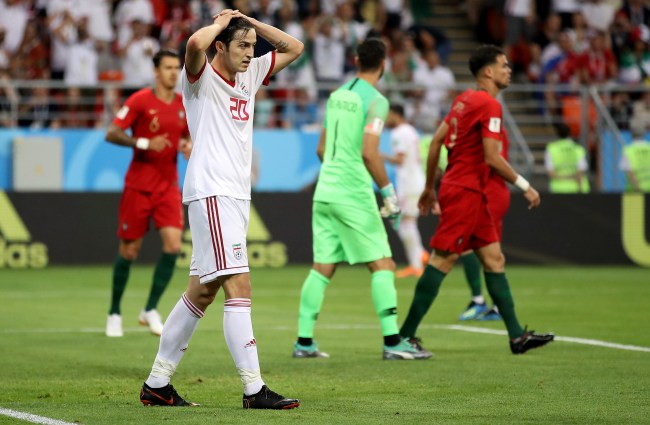 Iran striker Sardar Azmoun has been dubbed  the ‘Iranian Messi,’ scoring 11 goals in 14 games in qualifying matches, but brought none of that magic to the World Cup. The 23-year-old Azmoun played every single minute of Iran’s three WC matches, but was unable to score a goal in any, contributing to his team’s inability to survive past the Group stages.

Iran, who beat Morocco and lost to Spain, was very close to being the pride of the country when they nearly beat Cristiano Ronaldo and Portugal in their third match, but ended up drawing. If they pulled out the W, they would have progressed to the final 16 for the first time in history.

Instead, the scrutiny has fallen on the foot of Sardar Azmoun. Iran’s fifth all-time leading goalscorer announced on Instagram yesterday that he will be quitting the Iranian national team due to the insults and scrutiny that have been hurled his way following Iran’s World Cup exit.

“Playing in my national team has been a great honour for me and I will be proud of myself to the end of my days. Unfortunately … I have come to the decision to say goodbye to my national team.

“This is one of the most painful and significant life decisions for a youth of 23, who faced great hardships to get here …

“My mother had overcome a serious illness and I was happy, but unfortunately because of the unkindness of some people, and the insults that me and my teammates in no way deserved, her illness has become severe.

“This has put me in a difficult position where I must pick one or the other – and as a result I pick my mother.”

It could very well be that the wounds are still fresh for Azmoun and this post was a ‘heat of the moment’ decision. I can’t fathom one of Iran’s most prominent athletes quitting because of a few unkind words. If you can’t handle a little adversity, how do you expect to score a goal in the World Cup? Ok, that was a joke, Azmoun. Come back, I apologize.