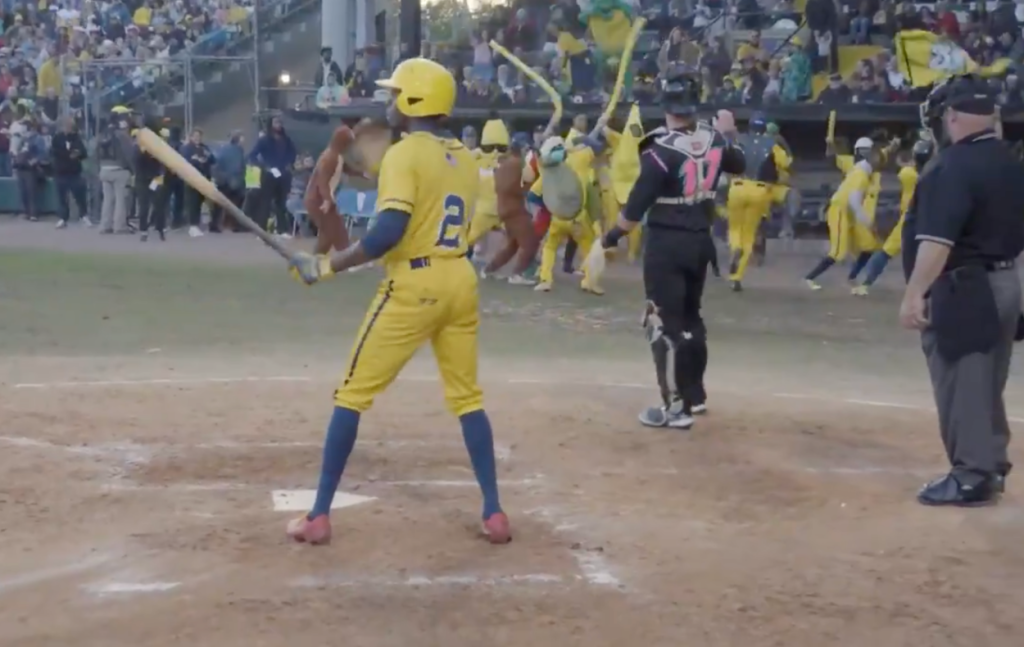 It feels like I blinked and suddenly the Savannah Bananas became the most electrifying show in sports. That’s obviously not the case since the team has sold out EVERY SINGLE GAME since the organization was founded in 2016 but they’ve been on fire lately.

The Savannah Bananas have gone viral a handful of times in recent weeks. One batter literally set his wooden bat on fire and then took the plate and smashed a hit. In a recent game, they also debuted the ‘tallest pitcher in baseball history‘. Prior to that, the team brought out a 75-year-old former Red Sox pitcher who struck out a current minor leaguer!

Now the Savannah Bananas have revived the electrifying ‘Harlem Shake’ which gripped the world back in 2013. It’s been nearly a full decade since the ‘Harlem Shake’ went viral all across the planet. I looked back into the BroBible archives at our articles and found this gem from someone’s wedding and it took me down memory lane back to a time when the Internet was nothing but new memes every day and people were having fun. So it’s nice to see the Bananas making a concerted effort to make life fun again.

We never want the Harlem Shake to die. And that's exactly why we had our whole team do it while Malachi Mitchell (@oppotaco11) walked up to the plate. pic.twitter.com/JDe2nIkDnS

Let’s see what the fans are saying…

No it’s Banana Ball. The Savannah Bananas are an exhibition baseball team. They are playing their other exhibition team the Party Animals. Think baseball’s version of the Harlem Globetrotters.

Stuff like this needs to be mandatory in the MLB. This is great.

Think of them like the Harlem Globetrotter referees. They are part of the act.

An exciting night for the Savannah Bananas

In addition to reviving the ‘Harlem Shake’ from the dead, the Savannah Bananas also put Maegan Wolf on the mound who became the first-ever female pitcher for the team. What made it even more special was her husband was her catcher:

If you’re not familiar with the Savannah Bananas you need to get up to speed real quick. They’re an American collegiate summer baseball team based in Savannah and they compete in the Coastal Plain League.

But the past few weeks have all been ‘World Tour’ exhibition games where they’re competing against a fictional team named the ‘Party Animals’. It’s all been pretty similar to what the Harlem Globetrotters do and honestly, it’s great to see this happening in baseball.