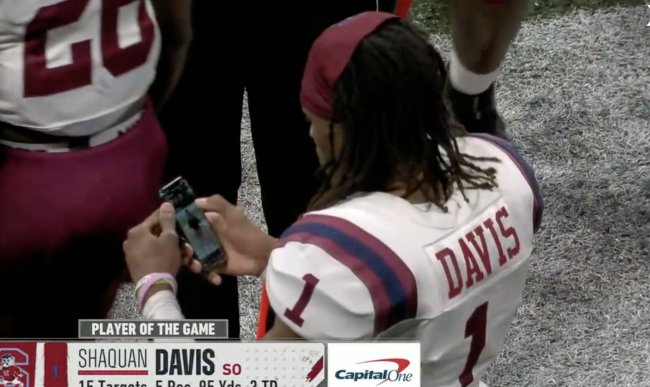 Shaquan Davis is a name you should know. The 6-foot-5, 215-pound wide receiver put on an absolute clinic on Saturday and did so in savage fashion.

Davis, a redshirt sophomore for South Carolina State, recorded five catches for 95 yards and three touchdowns in a Celebration Bowl win over Jackson State. The game, which pits the MEAC champion against the SWAC champion, is essentially the HBCU college football national championship.

And yet, behind Davis’ big day, the Bulldogs blew out the Tigers.

JSU got on the board first, but Davis found pay dirt just before halftime and S.C. State took a 10-7 lead into the break. After scoring his first touchdown of the day, Davis savagely broke out the ‘Primetime Shuffle’ to celebrate as Coach Prime looked on from the opposing sideline.

Davis scored again in the third quarter to make it 17-7 in favor of the underdogs.

Later in the game, ahead by two scores, Davis scored his third touchdown of the day and celebrated with a TikTok dance. His grown man catch was insane and then he really shook a leg.

DO YOUR DANCE, SHAQ DAVIS 🔥🔥🔥 pic.twitter.com/p0Cd4y6Unn

Davis was the unanimous player of the game. He had a dominant day and then proceeded to go full savage mode.

With time still on the clock, the camera cut to Davis on the sideline. He had his phone out and was on Instagram… AS THE GAME WAS STILL GOING ON!

When the clock hit zero, he hopped back online to see what was going on before heading out to shake hands. 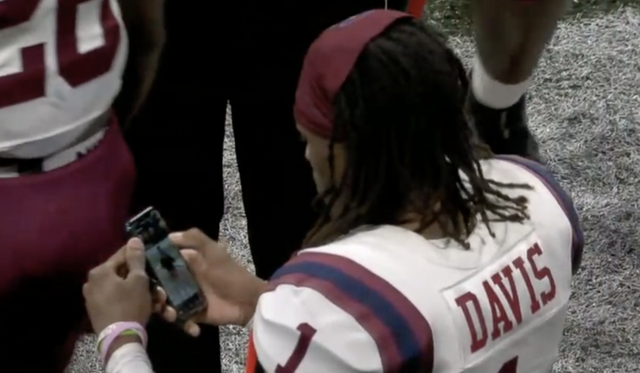 To make things even more savage, neither instance was the first time that Davis took his phone out during the game. Late in the fourth quarter, the broadcast showed Davis watching his own Primetime Shuffle highlights on the ESPN app.

Had S.C. State been losing or lost, it might have been a different story. But because the Bulldogs upset the “high and mighty” Tigers of Jackson State, it’s an all-time legendary move.