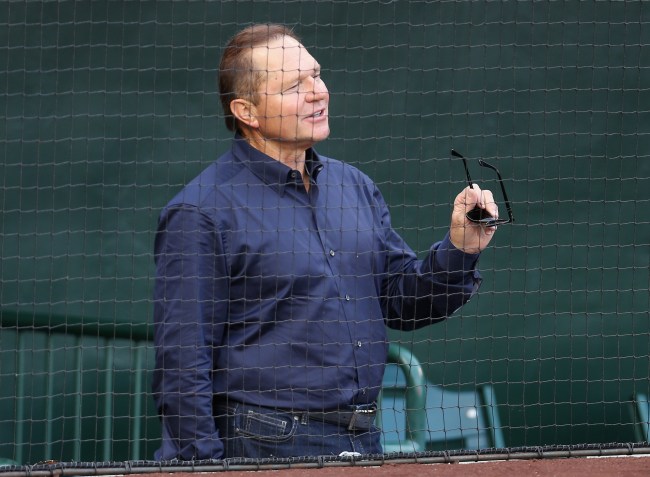 Scott Boras is the biggest power agent in all of baseball, and, possibly, in all of pro sports. Known for making multimillion dollar deals for some of his clients like Bryce Harper and the Yankees’ Gerrit Cole, among others, Boras has negotiated billions of dollars worth of contracts, and is connected with pretty much anyone he wants to be in MLB, so it’s quite the honor to have his name endorsing you.

While Boras worked his ass off to get to the top of the baseball agent ladder, he’s not just sitting up his perch and not helping others who, one day, hope to be in the position he’s currently in. And after the super agent heard about the heartbreaking story from Kobe Bryant’s memorial — which saw Lakers GM Rob Pelinka detail the final text he received from the basketball icon — Scott Boras knew he had to honor the wish.

Pelinka, while addressing the crowd, had some incredible words to say about Bryant’s final text to him; which, remarkably, came while the former Lakers star was on the helicopter flight that tragically killed him, his teenage daughter Gianna, and seven other passengers onboard. Here’s what Pelinka said during his powerful speech at the service remembering the victims.

Rob Pelinka says Kobe texted him when he was in the helicopter about helping the daughter of one of the deceased in getting a good baseball agent…oh man😖😖
pic.twitter.com/rRod4FBICW

“It was just passed 9:30 Kobe texts back explaining his desire a friend of his secure a baseball agent internships for one of his young daughters. Kobe vouched for the girl’s character, intellect and work ethic. He clearly wanted to champion a bright future for her.

I text Kobe right back and said I would put a plan in motion to get that done, a handful of minutes later Kobe, Gianna, and seven other beautiful souls ascended into heaven.

Kobe had been texting me from the helicopter, the girl in that text chain that he wanted to help so badly was Lexi Altobelli, the surviving daughter of coach John Altobelli who was also on the helicopter. Kobe’s last human act was heroic, he wanted to use his platform to shape a young girl’s future”

That’s heartbreaking, inspiring and brings out tons of emotions all at once. It speaks to the character of Kobe Bryant, and shows how much he cared about seeing people succeed.

Fast-forward to today, Scott Boras has said he’ll honor Bryant’s final wish that he relayed to Pelinka on that fateful flight, and will create a baseball internship for Lexi Altobelli, whose dad, John Altobelli, her mom, Keri, and her younger sister, Alyssa, were among the victims of the helicopter crash. It’s a small gesture to help the 16-year-old Lexi deal with such a tragic loss.

According to ESPN, Lexi will gain experience in “marketing, baseball operations, sports science and office administration” at his company.”

Kudos to Scott Boras for making this happen, and for Pelinka for detailing the story during Kobe Bryant’s memorial for all of us to hear about. Here’s to hoping this is Lexi’s big break and she goes on to do great things in baseball, just as Bryant probably envisioned her doing when he texted his longtime friend Pelinka to try and help her.