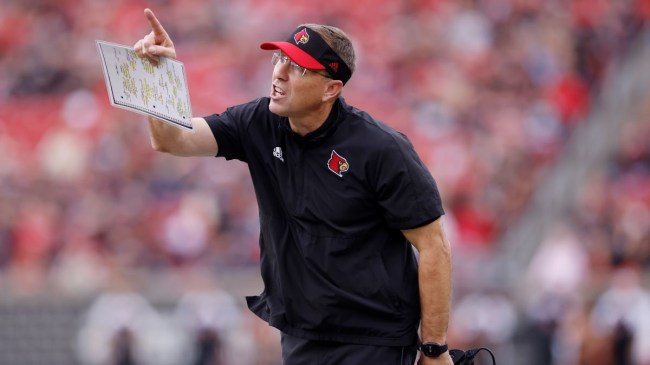 The college football coaching carousel is a wild and wonderful place. Just in the last month alone, it’s provided us with hilarious Lane Kiffin tweets, a babysitter for new Auburn head coach Hugh Freeze, and Deion Sanders telling his new players that they’re not good enough to play for him.

Thankfully for fans, college football is the gift that keeps on giving. And so we got even more wild news from the coaching carousel.

One year after making the College Football Playoff, the Cincinnati Bearcats found themselves in need of a new head coach after Luke Fickell bolted for the Wisconsin Badgers.

But Cincy didn’t need to look far. Instead, they make a shocking move by reaching just across the border into Kentucky and poaching Louisville head coach Scott Satterfield. Satterfield himself was on the hot seat after failing to win more than eight games in his four seasons with the Cards. But one of the best recruiting classes in the country had Louisville fans and administrators optimistic about the future.

Though now that’s no longer, and the circumstances of the switch are downright hilarious.

The Satterfield news appeared to come out of the blue on Monday morning, as his name was not previously linked to the job. It seems that the decision may have even caught the coach off guard, as he didn’t even meet with Cards players to tell them he was leaving.

Lmao @CoachSattUofL you’re a funny guy just letting the team know via FaceTime. Can’t even do it in person?😂

There is good news for those Louisville players, however. They’ll immediately have a chance to get revenge on their former coach. The Cardinals and Bearcats are scheduled to square off with one another on Dec. 17 in the Fenway Bowl. Something tells us that as meaningless bowl games go, this one may have some extra juice to it.