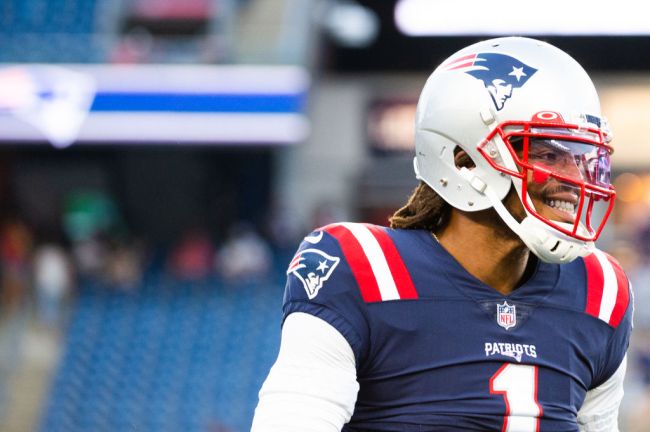 There’s no music or dancing allowed in football, at least that’s what former New England Patriot quarterback Scott Zolak thinks. According to him, music is what’s giving Cam Newton issues under center during practice.

Zolak, who spent seven seasons in New England as a player, is a Patriots color analyst and a co-host on ‘The Sports Hub,’ which is where he spouted off his extremely hot take about rap music being a distraction for Newton. He doesn’t like that Newton dances sometimes, clearly.

“I’d turn off the rap music first of all. Because I think it’s distracting for Cam here. Because in between every throw, he’s dancing,” Zolak said.

"I'd turn off the rap music first of all, because I think it's distracting for Cam. In-between every throw he's dancing…" -Zo

Cam can't even listen to rap & dance at practice in peace 😭😔 pic.twitter.com/oGxsTogIVg

Zolak’s co-host makes a solid argument saying that it would be more concerning to see Newton not dancing, which could indicate that something’s wrong.

How Newton dancing can get under Zolak’s skin that much, for him to urge the team to stop playing music at practice, is truly baffling. Cam Newton dances, he danced while he was at Auburn, he danced while he was a Carolina Panther, and he’s going to continue to dance. Could Newton end up being benched for Mac Jones this season? Absolutely, but I don’t think it’s going to be because he had too much fun dancing at practice.