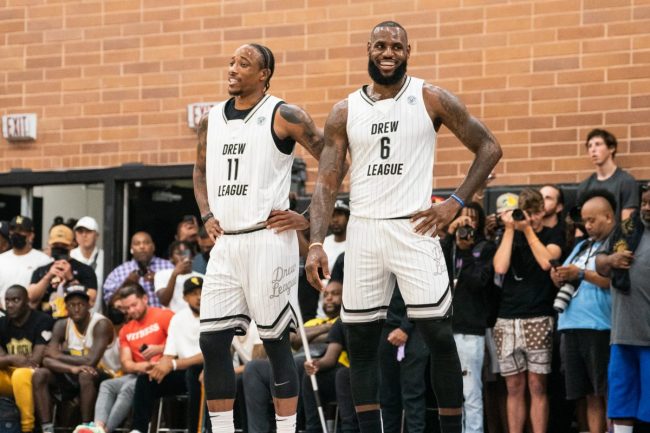 LeBron James is arguably the greatest player in the history of the NBA. He’s on his way to being the league’s all-time leading scorer, needing just over 1,300 more points to surpass Kareem Abdul-Jabbar.

That should happen next year, in what will be his 20th NBA season, as James has never scored less than 1,500 points over a full season. That will give LBJ yet another accolade for his Hall of Fame career.

James has literally done it all. He’s been an NBA champion, a league MVP, a Rookie of the Year, and an All-League defender.

But despite all of that accomplishment, many of his fans still feel the need to overhype his every move. And don’t get them started on the LeBron-MJ debate.

This week, Toronto Raptors forward Scottie Barnes took a moment to point out the excessive amounts of ballyhoo that LeBron fans tend to exude.

Scottie Barnes, the reigning Rookie of the Year, went on a long-winded rant to call out LeBron fans. He, admittedly, is a Kobe guy, and he’s tired of James’s supporters constantly inflating his every moment.

Barnes refers to a recent clip of LeBron at a Pro-Am where he throws down a far-from-vicious dunk in a warm-up session. One fan, in particular, rushes onto the court with an over-the-top reaction.

“Don’t lie though… I want y’all to watch this next clip and tell me if the d***eating is crazy. Watch what the man does here, now, and [LeBron fans] went crazy. No way, no way. He is d***eating with a hat on… I’m in tears bro, this guy has me dead.”

Barnes loses it after seeing the dramatic response. He identifies all LeBron fans in this way as they constantly worship the ground he walks on.

Then again, this can be said of MJ, and even Kobe fans, too. Hopefully, Barnes will one day have the following that James does. If so, it likely means he’s done something extraordinary with his basketball career.