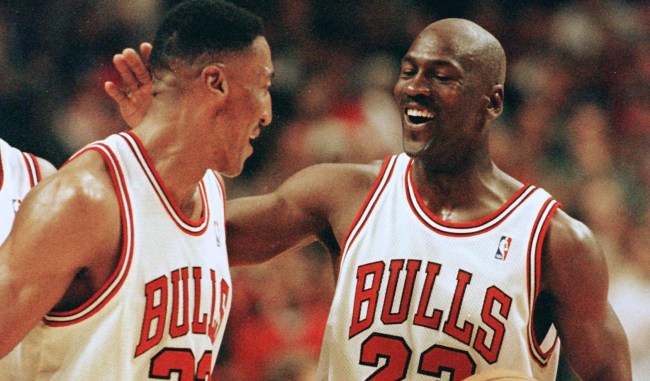 Following the way he was portrayed in the hit ESPN documentary series The Last Dance, which was often rather negatively, rumors sprouted up that Scottie Pippen’s relationship with his former Chicago Bulls teammate Michael Jordan was fractured.

Pippen, who at times was called selfish by Jordan in the docuseries – both over his contract dispute as well as Pippen refusing to enter the game at the end of Game 3 of the 1994 Eastern Conference Finals – was, according to longtime Bulls beat reporter Sam Smith, “hurt by his portrayal,” adding, “I don’t think their relationship is good now.”

There was also a report which claimed Pippen was “wounded and disappointed” by his portrayal in The Last Dance, and another report that said he was “livid” over it.

Fast forward to this week and Pippen says not of that was true.

Appearing on Da Windy City with Mark Carman podcast on Tuesday, Pippen was asked about the numerous rumors of a rift between him and MJ.

“My relationship with Michael is great, great as ever, there is nothing changed,” said Pippen, who along with the rest of us watched The Last Dance. “This documentary has not changed our relationship. We will be friends forever.”

Listen to “Scottie Pippen — "Michael Jordan and I will be friends for life"” on Spreaker.

Pippen doubled down on that stance while speaking with Dan Gelson of the Associated Press, telling him, “Why would I be offended by anything that happened 30 years ago? I wasn’t upset about it. It didn’t bother me at all. It was an opportunity for our younger generation that hadn’t seen or knew anything about basketball in the ’90s.”

So there you go, Pipp and MJ are as tight as ever. As for Horace Grant’s relationship with His Airness? That one might take a while to fix.