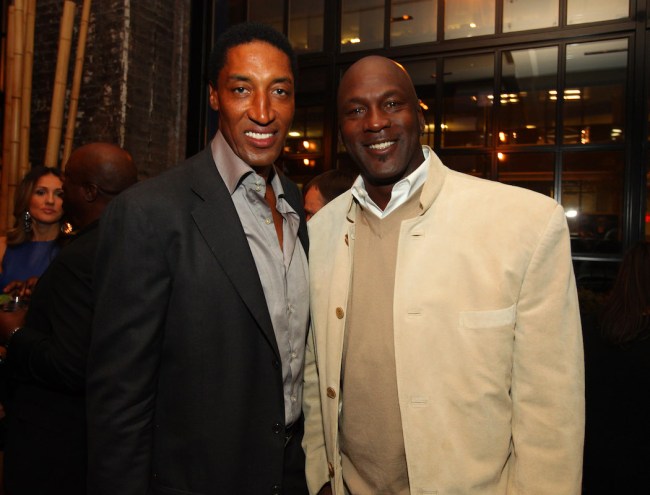 If there’s one player in NBA history whose career is like Rodney Dangerfield’s, it’s Scottie Pippen. A six-time champion, Hall of Famer, seven-time All-Star selection and, arguably, the best “Robin” to the Batman of Michael Jordan, Pip helped change the sport, literally creating a position called a “point four” because of his ability to play as both a guard and a forward. It still boggles my mind that this guy doesn’t get enough respect for his greatness.

Of course, Pippen’s legacy gets hit hard because he did play alongside Jordan, who, in most circles, is the GOAT, with MJ viewed as the catalyst of those great Chicago Bulls teams in the ’90s. But Scottie Pippen did play a major role in that dynasty — as we all witnessed during the summer’s The Last Dance, which documented those great Chicago teams.

For anybody who watched the 10-part series, one thing was obvious: Pippen still couldn’t get the respect he rightfully deserves, with Jordan — which the documentary was obviously centered around — even slamming his former teammate. In one scene, MJ called out Pip as being selfish for delaying surgery prior to the 1997-98 season during a contract dispute. Need I remind you that Jordan was making $33.1 million that season, while Scottie was earning just $2.7 million.

In another scene, MJ discussed a moment during a 1994 playoff game against the New York Knicks where Pippen yanked himself from the game because the final play was drawn up for Toni Kukoc instead of him. Jordan was playing baseball at that time, and Pip was the star of the Bulls, so giving up on his teammates was something that still stains his legacy.

Overall, Scottie Pippen was portrayed poorly in The Last Dance, only adding to the narrative that he wasn’t as great as he actually was, along with adding some fuel to the fire in terms of his reputation as a competitor. And, because of that, there had been reports after the documentary that said Pip and MJ’s friendship was a little bit tense after the depiction.

Whether true or not, Scottie Pippen gave a recent interview with The Guardian that sort of supports those rumors about his relationship with MJ, as Pip talked about standing up to Jordan to give his true feelings about the way he was shown in the documentary.

“I don’t think it was that accurate in terms of really defining what was accomplished in one of the greatest eras of basketball, but also by two of the greatest players – and one could even put that aside and say the greatest team of all time. I didn’t think those things stood out in the documentary.

“I thought it was more about Michael trying to uplift himself and to be glorified [the series was co-produced by Jordan’s Jump 23 company]. I think it also backfired to some degree in that people got a chance to see what kind of personality Michael had.”

Those are some honest opinions from Pippen, which isn’t something we’ve often seen from him when discussing his relationship with Michael Jordan. The Hall of Famer went on to say he mentioned his thoughts to MJ, and that His Airness accepted the concern and agreed with the assessment.

“Yeah. I told him I wasn’t too pleased with it. He accepted it. He said, “hey, you’re right”. That was pretty much it.”

Good on Scottie Pippen for saying something to Michael Jordan about this, even if there was never any real bad blood. In the grand scheme of things, it doesn’t matter — after all, the duo won six titles together and helped redefine the entire league during the ’90s — and nobody can take away those great memories.