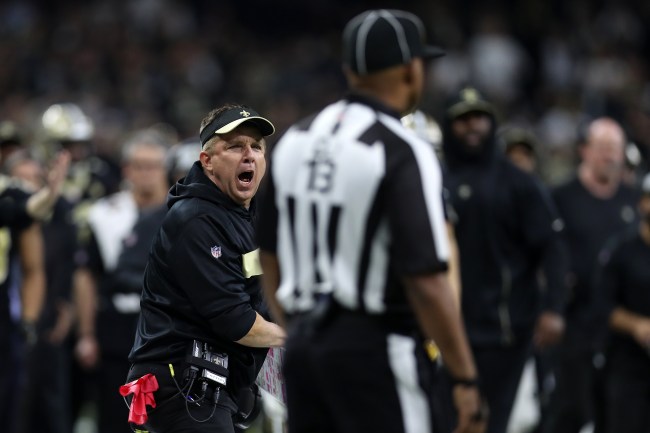 Sean Payton and his New Orleans Saints were absolutely robbed in the NFC Championship Game, so much so that, we’re just a few days from Super Bowl 53 and we’re still talking about the piss-poor job that the refs did in missing that pass interference call on L.A. Rams cornerback Nickell Robey-Coleman. And, because the sting of a loss like that never, ever goes away, there’s little to do to try and make it fade out of your mind.

And, for Payton, he admitted that that loss felt like a break-up, leading to him housing some ice cream and watching Netflix to help him get over it. Hey, brother, respect.

Talking to media for the first time publicly since “Operation L.A. Refs Totally-Screwed-Us-Gate,” Sean Payton admitted that he took the loss pretty damn hard, which makes sense, considering each NFL season has to feel like a relationship ending, with players and coaches moving on after one ends. And, for the Saints’ season to end the way it did, well, it was mentally damaging for Payton.

Per WGNO, here’s what the head coach had to say.

“Much like normal people, I sat, probably didn’t come out of my room, I ate Jenny’s ice cream and watched Netflix for three straight days,” Payton said. “There’s certain vices you gravitate to. For me, it’s probably sugar.”

“You watch the Ted Bundy Tapes, and then all of the sudden you watch the series calledYou, and it’s like when Ted Bundy met, like, Dawson’s Creek,” he said. “It’s brutal.”

Sean Payton also added that, as much as the loss hurt and the bitter feeling will, probably, never just go away, he did mention that life will go on for him and his team. Sometimes, you things just don’t pan out the way you want them to.

It’s pretty cool to see a head coach as successful and confident as Sean Payton come out and tell it like it is. Even as a grown-ass man, the New Orleans Saints coach isn’t afraid to admit his sensitive side got the best of him after the NFC Championship Game loss — and that’s kind of rare. Take a look at the entire press conference from Payton below.

As for Payton’s team, well, his future Hall of Fame quarterback, Drew Brees, already said that he won’t let the loss in the NFC Championship Game define him or hold his team back, so it looks as if the Saints are trying to move on and get on with their lives — maybe it’s time everyone does the same. It sucks losing that way, but if the team involved know nothing can change the outcome, other people should come to grips with it, too.