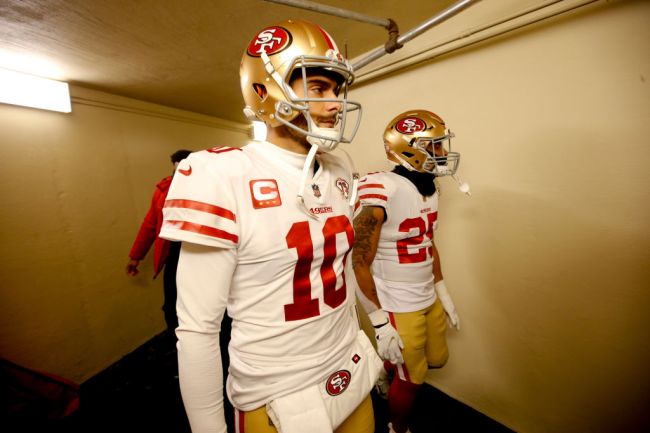 When one NFL rumor disappears, there is always one waiting to take its place.

Earlier today, Jimmy Garoppolo’s agent shot down the rumor that there was interest in him being traded to the Tampa Bay Buccaneers. Now there is another team that is being linked to a potential move for Garoppolo.

According to ESPN’s Jeremy Fowler, the Seattle Seahawks have had internal discussions about trading for Garoppolo and have watched film to see how he’d fit with the team.

#Seahawks have had "internal discussions" about trading for division rival #49ers QB Jimmy Garoppolo, per ESPN.

"They've done their film work to see how he will fit."

The #Seahawks top options at QB currently are Geno Smith and Drew Lock.pic.twitter.com/1as5Z2aG6t

How Garoppolo would fit with Seahawks seems like way less of an issue than how the Seahawks would even get this move to happen.

Unless the Seahawks were willing to offer a truly enticing trade to the 49ers, there is little incentive for the San Francisco 49ers to help a division rival compete during the 2022 season. They could very well just decide that they’d rather have Garoppolo for insurance in case Trey Lance gets injured.

However, there is no doubt that going out and getting Garoppolo would make the Seahawks a better team. Despite his shortcomings, Garoppolo is unquestionably a better quarterback than Drew Lock or Geno Smith.

If the Seahawks’ film review showed them that Garoppolo would be a good fit, they’ll just need to figure out whether or not the 49ers would even considering trading Jimmy G to them and what it would cost if they would consider it.