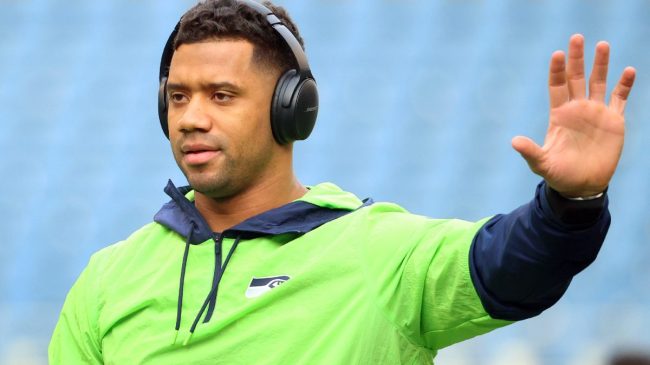 The Seattle Seahawks have officially moved on from QB Russell Wilson.

On Tuesday, it was announced that he’d be on his way to Denver in exchange for Drew Lock, Noah Fant, Shelby Harris, and a handful of NFL Draft picks.

The news of the blockbuster deal took the NFL world by storm. The Broncos’ media team showed their happiness of bringing Wilson in through a well-timed meme from the movie, “Cast Away.”

Fans in Denver went from being immediately upset about missing out on Aaron Rodgers to ecstatic about landing a Super Bowl winning passer in Wilson.

The same can be said for Denver Bronco players.

The feeling in Seattle, though, is a bit less cheery.

While the franchise does land a ton of draft value in the deal with Denver, they also lose quite possibly the greatest player in the history of the team. Wilson has been a Pro Bowler in nine of ten seasons spent in Seattle. He’s also led them to their only Super Bowl title.

It may have been the right time for the two sides to part ways, but the Seahawks are now giving off the impression that they don’t care about losing the future Hall of Famer with their latest tone-deaf Twitter post.

And fans and media, alike, are ripping the post to shreds.

Just moments after trading away the best player in team history, the Seahawks’ social media team thought that it would be a good idea to keep the “Cast Away” theme going, posting another famous clip from the movie.

Yes, we all remember it well.

Tom Hanks, stranded, looking for his only friend, a ball named Wilson.

Unfortunately, it doesn’t seem like the Seahawks did a good job of reading the room before clicking send. Social media was quick to rip the post apart, and rightfully so.

this is kinda sad..

Wow. Y’all are not reading the room here. This is a disaster of a tweet.

you think this is a joke

Ok this is actually sad

It’s great meme material if you’re a fan of a different team, but simply rubbing this in the faces of your own fan base… not a good look. https://t.co/P0xrXDso7J

Does anyone have a clue what they’re going for with this post?… https://t.co/XN42Chsyb0

In a way, the clip is fitting. With Russell Wilson now gone, it could be the Seahawks who are stranded in NFL purgatory as they look to begin a rebuild.

Still, most view it as total disrespect to a player that landed them their only NFL Championship.