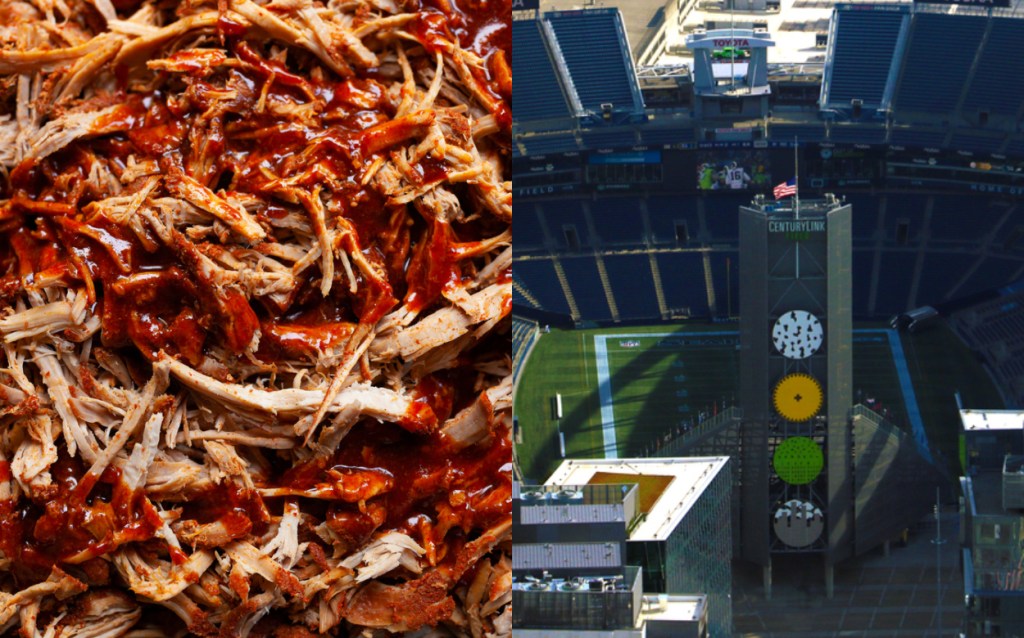 At this point, I firmly believe the popular Twitter account Footy Scran posts pictures of mediocre just to rile up Americans. The account shares the “best (and worst) scran at” games. ‘Scran’ is defined as ‘scraps of food, leftovers’ but here it refers to all of the food that people can buy at soccer guys, food like this sandwich from the Seattle Sounders.

Footy Scran (@FootyScrean) shared this pic of a $15 ‘Pulled pork sandwich at Seattle Sounders’ games and it’s not even the price that has gotten under my skin, or the quality of the food, it’s the amount. The bun already looks saturated from the tiniest bit of barbecue sauce on top and there’s barely any pulled pork on the sandwich to begin with. And the pulled pork that’s there looks more like wood chips than actual pulled pork.

It’s not even chopped pork. I’m honestly not sure what it is but there’s not much going on and I’ve dubbed it the ‘world’s saddest pulled pork sandwich’ based on quantity, not quality. And hundreds of people have been roasting the Seattle Sounders over this sandwich on the Footy Scran account so let’s check out what the people are saying.

Here are some of the best responses:

Could never be Texas ❤️ pic.twitter.com/u1rx7J3jL0

The best game day food in Seattle has always been the hotdogs stands outside of the stadium. Everything in the stadium is just disappointing.

A lot going on here. First, that is not pulled pork. Second, 15 dollars without any side lol.

We’ve got to stop paying these ridiculous stadium prices. I miss getting a shitty slice of pizza and a beer at my now defunct local semi-pro side for like 6 bucks.

Too small for 15 bucks. Granny asks "where's the beef?" pic.twitter.com/jVBHQC7w1R

Ok so where is the pork part? All I see is bread and BBQ sauce my brother in Christ https://t.co/BdsRDcOo1g

This why y’all shouldn’t be all making bbq west of Texas. https://t.co/EvoKdCllaj

There are some people in the comments saying you shouldn’t come to seattle for BBQ or order BBQ in Seattle. I’ve never eaten BBQ in Seattle but I’m of the mind that great food can be made anywhere as long as it’s done right. There’s no reason the Seattle Sounders shouldn’t be selling excellent barbecue even if it’s not part of Seattle’s history. They just need to actually try a little harder than this.

Ultimately, the food itself looks tasty. What they’re missing is enough meat. They need a $5 add-on option for another scoop of pulled pork, they need to actually pull the pork, and then offer some BBQ sauce on the side.

That’s how I’d fix this sandwich. And as far as I can tell there isn’t a side that comes with this sammy which is pretty pathetic. At least toss in a tiny tin of cole slaw for me to throw away…

For anyone out there who is wondering, the Seattle Sounders currently sit 12 out of 14 in the MLS Western Conference but they’ve only played 7 games whereas most of the other teams have played 10.