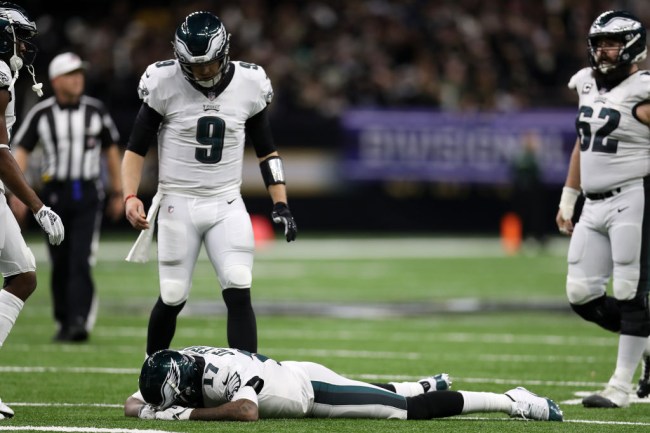 Eagles fans don’t need to be reminded of Alshon Jeffery’s oopsie in the NFL divisional round so I won’t dig up the demons. Props to me for being a good man. I’ll let the footage do the talking and you can draw your own conclusions.

HUGE PICK FOR THE SAINTS!!!

Nick Foles’ pass goes through Alshon Jeffrey’s hands and Marshon Lattimore gets his second interception of the game when the Saints needed it most 🔥🔥🔥 pic.twitter.com/pMGSF6CbOC

Some Eagles fans did not handle the season-ending drop well, while others, like second grader Abigail Johnson, were kinder about it. Abigail penned a hand-written letter to the Eagles receiver that is currently going viral.

Dear @TheWorldof_AJ, our second grade daughter is a huge fan and wrote you a letter in school yesterday. @Eagles #FlyEaglesFly #Eagles 🦅🦅 pic.twitter.com/N3bx7xLlQl

It reads [without correction for spelling for extra *cuteness*]:

I am a huge Eagles fan. When I watched the play last night I was crying. It’s okay to loose a game you don’t always have to win a game. We couldn’t have won the Superbowl without you last year. I think you are a awsome player no matter what. It takes lot of practice and curage to catch a ball. I think you are a good athlete. It takes a lot of practice to become a good athlete. I love you! My whole family was rooting for you! Don’t give up on playing football. Keep practiceing. Don’t get mad esally. I know you can do it. We all know you’re a good player.

But Eagles fans had no problem making fun of Tom Brady for having butterfingers in the Super Bowl.

And he’s a quarterback.

That’s not even his job.

Oh gimme a break. What goes around comes around.

I was a big Alshon fan when he was a Bear but after his taunting the fans after the #Bears loss last week I don’t feel bad for him one bit. Bye bye Mr. Jeffrey. pic.twitter.com/mNKHvzS0J3