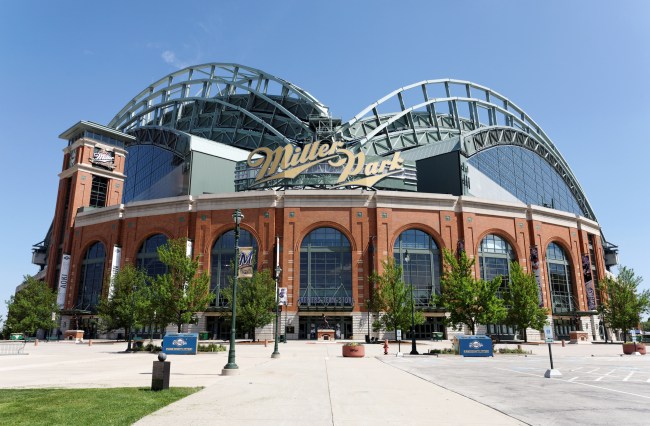 The Milwaukee Brewers have been slipping. They finished last season 2nd in their division and took the Wild Card spot. They went on a TEAR the season before that and went 96-67 to win the NL Central. But this season they’re 4th in their division with three days left and a 27-29 losing record on the shortened season. Then there’s this dude, Keyon Lambert, who just piled more salt into the team’s wounds this season.

He was accused of sneaking into the stadium back on June 2nd and by ‘sneaking’ I mean ‘he walked through an open/unlocked door’ and his plan was to use a tractor to write his name in cursive on the field using the tractor tires but the tractor was apparently too slow so he resorted to digging holes and causing a cool $40,000 worth of damage.

Stephen Watson is a sports anchor/reporter for WISN 12 News in Milwaukee and he filed an ‘open records request’ to see the security camera footage of the incident and the Brewers complied. Here we get to see the accused casually open the front door and then try to smash a security camera before making his way to the field where he dug holes using a tractor.

The cherry on the top is this guy taking a trip around the bases before leaving $40K in damages behind. Did he really think he wasn’t going to get caught?? Could he have possibly assumed that there was only that one security camera in the building?? Nobody can be that dumb, can they?!

Keyon A. Lambert is accused of causing $40,000 in damage, digging holes in the grass and dirt with a tractor. He finished by running the bases before walking out. pic.twitter.com/cOBCF5OXdD

Lambert was charged with criminal damage to property and disorderly conduct. For more on the criminal complaint, here is the WISN article from June. https://t.co/h8UVU1rl47

His choice of running the bases in the opposite direction is really throwing me off. Nobody of sound mind would ever do that. Maybe that was the plan all along. Do something so incredibly insane on the security camera that a lawyer could point to the footage and claim ‘your honor, clearly my client was out of his mind because no sane individual would ever run the bases in that direction.’

It’s actually a pretty brilliant defense because there’s no argument against it. No person of sound mind would ever get on a big league field (or any field) and run the bases in the wrong direction. It defies all logic. The man’s innocent in my mind.

Here’s the rundown from WISN:

The report said the person they arrested later and identified as Lambert admitted to scaring the security team by reaching to his waist so they would be afraid to approach him.
An estimated $40,000 in damage was done to the Miller Park field, the report noted.
The man on video is later seen jogging from first base to home plate to third base before walking out of the stadium from the first base side.
Lambert was later released on a signature bond.
A judge ordered him to have no contact with Miller Park and ordered him to undergo a mental evaluation.
He pleaded not guilty by reason of mental disease or defect.
Lambert is scheduled to return to court Oct. 12. (via WISN)

Will I update this article in the future after he appears in court on October 12th? To be honest, probably not. I feel like I’ve gotten everything I want/need from this story from that security footage and I’m ready to move on.

I am questioning if I’d ever be able to operate a tractor like that by myself if I were to commandeer one on the fly and I’m not so sure I could.