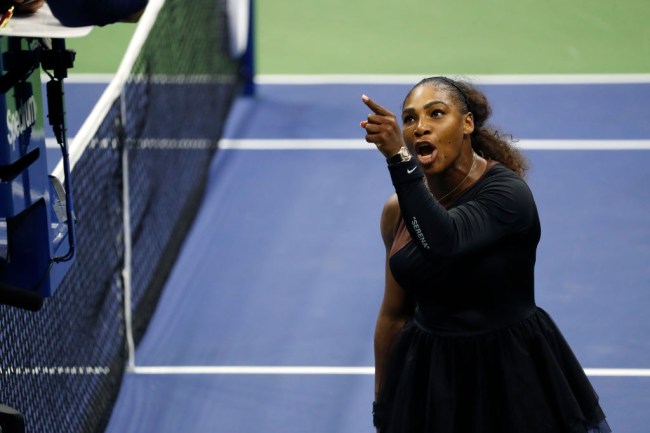 If you’d asked me last week, I would have predicted the most controversial moment of this year’s U.S. Open wouldn’t have anything to do with what transpired on the court after a fan was caught dunking a chicken finger in her soda.

Ew, no. #USOpen
Chicken tenders dipped in soda…
Who are these people? Show yourselves so I block you pic.twitter.com/pVitWhT1RG

That all changed during the women’s final between Serena Williams and Naomi Osaka this weekend, where Williams put umpire Carlos Ramos on blast after he accused her of cheating by taking advice from her coach— an accusation Williams did not take kindly to.

"You owe me an apology!"

Serena was fired up with the official in the final set of the US Open final. pic.twitter.com/r6RSbrirnV

Williams was eventually docked a full game for her behavior and it didn’t take long for Osaka to close out the match and take home her first Grand Slam singles tournament— an achievement that was overshadowed by the controversy that led to both players showing some serious emotion in the wake of her victory. 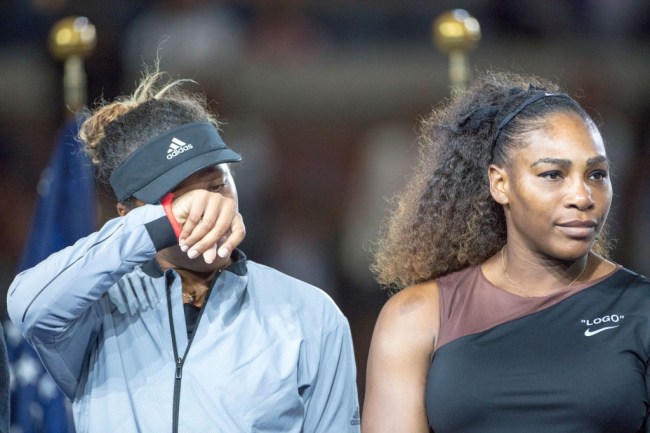 The incident sparked a dialogue concerning a noted discrepancy between how male and female tennis players are treated for outbursts on the court and many of her peers were quick to defend her actions and criticize Ramos (and the culture in general).

I will admit I have said worse and not gotten penalized. And I’ve also been given a “soft warning” by the ump where they tell you knock it off or I will have to give you a violation. He should have at least given her that courtesy. Sad to mar a well played final that way. https://t.co/xhBzFZX8Wq

However, there were plenty of other people who were not a fan of what they perceived as a temper tantrum— including one cartoonist at Australia’s Sun Herald who decided it was a good idea to do… this.

This is Jim Crow-racist. He Sambo’d Serena Williams. I’m a bit surprised that @Knightcartoons didn’t include a watermelon. For those unfamiliar with the history invoked here, read about the coon caricature. https://t.co/ffmrk76MRM

That’s um… not a great look.

If you’re even vaguely familiar with the many racist depictions of black people in the media over the past few centuries it’s pretty clear that this should have never seen the light of day and people quickly jumped on the paper and the cartoonist responsible (including J.K. Rowling, who took a break from retconning the Harry Potter series to share her thoughts).

Well done on reducing one of the greatest sportswomen alive to racist and sexist tropes and turning a second great sportswoman into a faceless prop. https://t.co/YOxVMuTXEC

Holy crap. This Serena cartoon is racist AF & reminiscent Jack Johnson cartoons in 1910. Mark Knight should be fired. But any Herald Sun editors that would allow this, should fire themselves first. https://t.co/Usgd7pWH8b

Others also noted the artist seemed to portray Osaka (who has Japanese and Haitian heritage) as white as if he needed to try to make things worse for himself.

Whatever you think of the Serena Williams situation, I think we can all agree that this cartoon is disgusting. Erasing Naomi Osaka’s blackness alongside a grossly racialised caricature of Serena, invoking racist stereotypes, is obscene. https://t.co/Z09T7rt5tt

This small boy doesn’t realise he’s drawn a cartoon that will be studied and shown for generations after Serena retires for encapsulating the hostile misogynoir she endured from an insecure white gaze uncomfortable with her greatness. Even his erasure of Naomi Osaka is perfect. https://t.co/xgDFrURx3B

This is also apparently not the first time the cartoonist has managed to be impressively tone-deaf.

The Australian cartoonist of *that* Serena cartoon has form. pic.twitter.com/n7RhMzhADG

This guy might want to take a lifelong break from the whole “cartoon” thing.