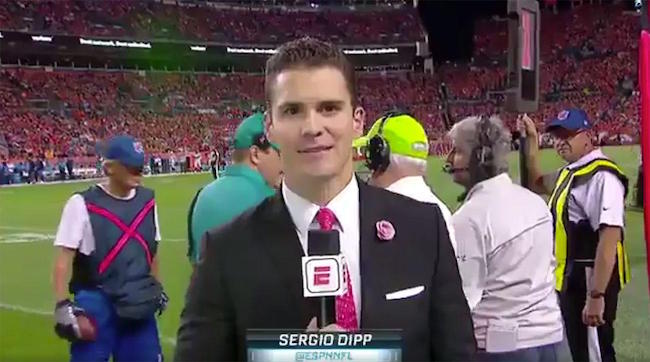 ESPN Deportes reporter Sergio Dipp won the hearts of America on Monday Night Football last month with his sideline segment that was equal parts cringeworthy and electric. He was nervous and stumbling and it also didn’t help that he didn’t have a complete grasp on the English language. His first quarter segment on Broncos coach Vance Joseph could be adequately summed up with the following:

For those who just couldn’t get enough of Serg, good news: he will return to the MNF sidelines for the Patriots and Raiders game at Estadio Azteca in Mexico City on Nov. 19.

The 29-year-old, who has been working with ESPN since 2013, was a champ about the incoherent rambling, tweeting out things like this:

In a recent interview with Sports Illustrated, Dipp delved in to the incident:

“That Monday was the first time people in America probably saw me but I have been working in sports media for 10 years,” Dipp told Sports Illustrated. “I have always considered myself a team player and kept on doing my job. After my first hit, my focus was on letting my producer in the truck and Beth [Mowins] and Rex [Ryan] in the booth know, for example, that [Broncos guard] Ron Leary was in concussion protocol and then that he was out of the game. I let them know in each commercial break whatever new information I had. I always felt that I was doing my job and always considered myself a team player. I was letting them know what was happening on the field and I was not upset at all.”

Dipp continued to spin a positive light on the situation, in total Dipp fashion:

I guess it’s easy to be positive, Dipp when you got a girlfriend who looks like this…