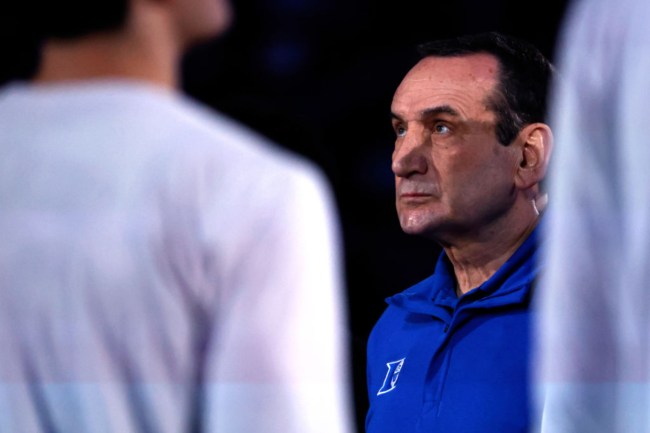 The North Carolina Tar Heels spoiled Mike Krzyzewski’s farewell tour not once, but twice. While their win over Duke in Coach K’s final home game was one thing, the loss UNC handed him in the Final Four this weekend is on an entirely different level.

Coach K was two wins away from the most incredible storybook ending anyone could have ever dreamed, but instead, his Blue Devils fell to their bitter rivals in their first-ever matchup in the NCAA Tournament.

It goes without saying that Coach K losing his final game before retiring was going to sting no matter who handed his team the loss, but the loss to UNC is going to be on his mind for a very, very long time.

ESPN’s Seth Greenberg expanded on that thought and gave some perspective on how Coach K’s career all of the sudden being over is going to weigh on him.

“Think about this, Coach K, for 40 pus years, when the season ended, he woke up the next morning and asked ‘what do I need to do,’ Greenberg explained.

“Coach K is going to wake up Wednesday morning and go, ‘alright, what’s my why?’ So he’s going to have all this time to look back and he’s not going to think about the championships, the Olympic gold medals, the players whose lives he’s impacted, it’s going to go back to, quite honestly, the last game at Cameron and that last game in the semifinals against North Carolina.

“This one’s going to be hard to let go.”

.@SethOnHoops says Coach K won't be forgetting about Duke's loss to UNC in the men's Final Four any time soon.

"This is going to stick with him for a while." pic.twitter.com/G8v9g9Dma9

Coach K end his career with a record of 1,129-309, five NCAA Tournament rings, and a three-time coach of the year.