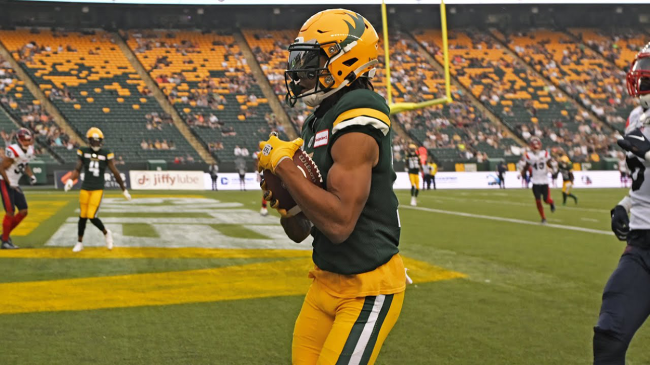 Doing a backflip is difficult. Doing a no-hand backflip while holding a barbell with 10 pound weights is even more so.

Well, Edmonton Elks wide receiver Shai Ross can do both. The Winnipeg-born pass-catcher became an online sensation last year by doing a two-handed front flip into a no-handed front flip and then dunking an Oreo cookie into a glass of milk while in mid-air.

This time, almost a year later to the date, Ross is going viral for doing a standing backflip in the weight room with 65 pounds in hand. The bar weighs 45 pounds and the plates are 10 pounds each.

Ross, 28, is entering his fourth year in the CFL, was a fifth round draft pick in 2019. He has played his entire career with Edmonton.

The way that Canadian football works is very different than the typical path of high school to college to the NFL in the United States. While that route is certainly still an option, it is not as common in a country where football is not king.

In Ross’ case, he started playing football in high school and then played for a junior league team before going to college and balling out with the Manitoba Bisons. From there, his ridiculous athleticism — which was on display with his flipping abilities — impressed CFL scouts and led him to a professional career as a kick returner, primarily.

Now entering his fourth year (really his third after the 2020 season was cancelled due to COVID-19), he is hoping to break out and become more than just a viral sensation. Either way, he has done what most cannot say that they have and his athleticism is truly unmatched.