Shailene Woodley Is Reportedly ‘Done’ With Aaron Rodgers, Again, After Giving It ‘Another Shot’ 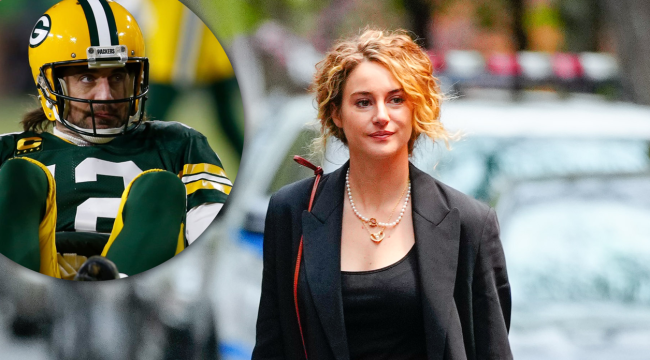 According to a new report, despite several sightings of them out together following their first reported breakup back in February, Shailene Woodley is “done” with Aaron Rodgers, for good this time.

E! News, who previously said the pair were working things out, now reports that Woodley has had enough and that they “are not together” anymore.

“Shailene tried to give it another shot and was spending time with Aaron,” the insider told E! News. “But she quickly saw that everything was on his terms and nothing was going to change. There was no reason to continue and she’s done with it again.”

Aaron Rodgers and Shailene Woodley Hang Out at California Winery, Casino: Aaron Rodgers' off-season is off to a sunny start — the guy is back in California with his girlfriend, sippin' a little vino and cashing in chips … riding out the high of his fat payday. The Packers QB… pic.twitter.com/Dlv1GBJ4cA

Back in early March, it was reported that since Rodgers was done with his season he had more downtime and could focus more on their relationship. Apparently, that wasn’t good enough, so now he is once again, back on the market.

Interestingly, just a few days before this latest report, Rodgers was spotted seated courtside next to Mallory Edens, the daughter of Milwaukee Bucks co-owner Wes Edens, leading some people to speculate that they are now dating.

he sat courtside next to his teammate Randall Cobb and Mallory Evans, daughter of billionaire Wes Edens pic.twitter.com/SNEKvsMGUy

Of course, playing in Green Bay, this isn’t the first time Aaron Rodgers has been a guest of the Edens family, nor the first time he has sat next to Mallory Edens at a game.

Daughter of the Buck’s owner, Mallory Edens, is sitting next to Aaron Rodgers in a Pusha T shirt..

Not in the 6 anymore pic.twitter.com/FKAXsWWxDU

It was on one of those nights in 2019 that Rodgers went viral and got shamed by the internet (and many celebrities, including Tom Brady) for his poor beer chugging skills.