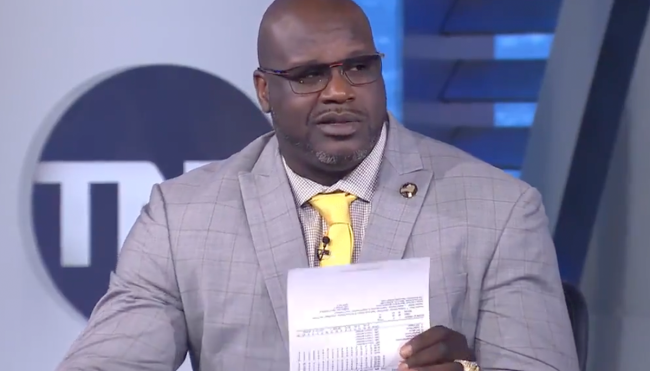 If you’ve ever been on Facebook, you’re probably intimately familiar with what it’s like to find yourself in an argument with someone who will not just refuse to admit they’re objectively wrong about something but who will double down whenever they’re presented with evidence that proves the hill they’re willing to die on is just a giant pile of lies.

This inverse correlation between how incorrect someone is and how irrationally confident they are that everyone else is actually an idiot was first observed a couple of decades ago by researchers who dubbed it the “Dunning-Kruger Effect,” and based on a paper that was published earlier this month, humanity’s capacity for incredibly misguided intellectual superiority is depressingly impressive.

Shaquille O’ Neal has come a long way since he blew $1 million in a single day thanks to his inability to grasp how math works, and it would be hard to apply the “dumb jock” label to a guy who’s made plenty of shrewd moves and business decisions on his way to racking up a net worth of $400 million.

Of course, this is the same guy who thought Kazaam was a good idea, so it’s not like Shaq is infallible—and if you need more proof, I would direct you to a segment from Thursday’s edition of Inside the NBA (although you should be warned there’s a good chance it might break your brain.)

In 2018, the guy dubbed “Shaq Diesel” revealed his grasp on the finances of fuel leaves something to be desired when he shared the so-called “strategy” he uses to save money on gas and confused the hell out of his befuddled co-hosts in the process.

Shaq's out here crunching some numbers for Kenny. 🤔😂 pic.twitter.com/jNgBYFFwYj

If you’re confused by Shaq’s argument that you’ll save money by refilling your gas tank in $20 increments as opposed to filling the entire thing up for $80, you’re not alone, as he is probably the only person on the planet who possesses the kind of Big Brain you need to comprehend his rationale.

Shaq has had three years to take a closer look at that math, but it appears he hasn’t decided to reevaluate his thesis after he once again attempted to make the world see the light even though it’s been entirely consumed by the cognitive black hole he opened up with his unfathomable logic.

"We're going on like 3 or 4 years of having this conversation." 😂@SHAQ is STILL arguing about gas tank math. pic.twitter.com/hSPScyMAR6

I think it’s safe to say Shaq should probably stick to selling car insurance with the help of a crudely animated military official and leave the intricacies of the most efficient way to keep those vehicles powered to the experts.