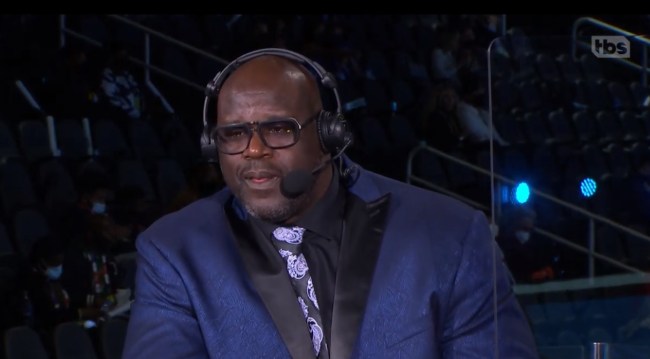 Shaq appears to have once again stuck his foot in his mouth.

Sunday’s NBA All-Star game was dedicated to Historically Black Colleges and Universities. According to the league, they were giving HBCUs $3 million in charitable donations while also putting a spotlight on the schools during the weekend.

The court represents both the academic significance, as well as the incredible pride & school spirit of HBCUs & their students. Created with HBCU alumni, it incorporates icons representing the best of HBCU academics, music and campus life. pic.twitter.com/Hz3UgyHH1D

While talking about HBCUs during the All-Star game, Shaq told the story of how he couldn’t pass biology at LSU but was able to transfer to Southern University to complete the course.

I have a confession, if it wasn’t for an HBCU, I wouldn’t have graduated from LSU. I couldn’t pass biology at LSU and I cross transferred to Southern University and they let me take a biology class

Many felt Shaq was saying HBCU classes were easier than a state school like LSU which didn’t sit right with viewers at home.

"I couldnt pass Biology at LSU so I attended an HBCU to re-take Biology." Great story Shaq 😑

Shaq is an idiot …Why would he tell that story when they are trying to promote n highlight hbcu education ?

Why did shaq think that was a good anecdote about HBCU’s ? Lmfaoooooooooo

The NBA is making HBCU’s look like underserved high schools and I don’t like that. Shaq was out here talking about he couldn’t pass biology at LSU so they let him go take it at Southern.

Shaq should’ve kept that one to himself . Just made it sound like it’s easier to get a degree at a HBCU. Know that wasn’t his intention but that’s how it came out