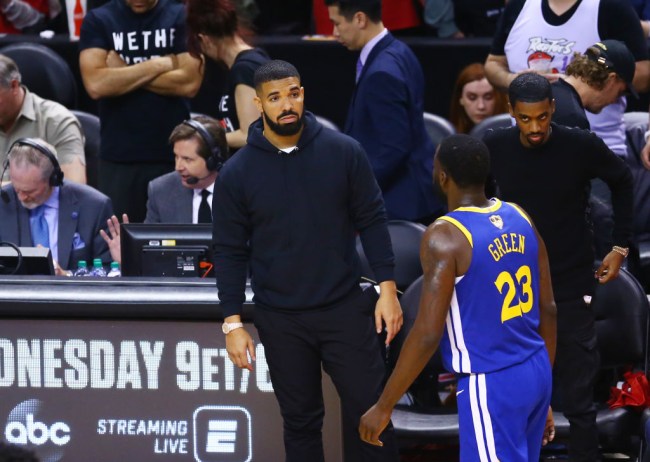 Drake has constantly been blamed for cursing the teams and athletes he roots for on a regular basis—his most recent victim was Anthony Joshua—but as of right now, the Toronto Raptors have managed to escape the rapper’s curse as they compete for a championship against the Golden State Warriors in this year’s NBA Finals.

We’re only two games into the series but Drake has been in full troll mode since the beginning when he showed up to Game One rocking an autographed Dell Curry jersey.

He then used his apparel to make a statement after rocking a sweatshirt bearing Macaulay Culkin’s likeness on Sunday in order to fire a shot at Kevin Durant.

Unfortunately for him, his latest stunt backfired as the Warriors managed to even up the series and he was soundly mocked by Durant and Klay Thompson following the game.

The NBA previously warned Drake about his behavior after the Eastern Conference FInals but he shows no signs of letting up anytime soon and there’s at least one person who’s a fan of his constant trolling: Shaquille O’Neal.

Shaq was recently cornered by a paparazzo for TMZ who wanted to get the NBA legend’s take on the series and he was more than happy to share his opinion—especially in regard to Drake.

“As a fan, you want to see smack talk. Drake versus Draymond, I love it. Kevin Durant and Klay calling him by his government name, I love it. As a fan and an analyst, you just want to see good basketball.”

He proceeded to praise Drake for promoting his brand, saying:

“Drake is Drake… He’s just having fun and having a good time… Drake is a smart guy. He knows what he’s doing. It’s called ‘marketing,’ people.”

The Raptors might not end up taking the series but at least Drake can take solace in the fact he has Shaq’s seal of approval.