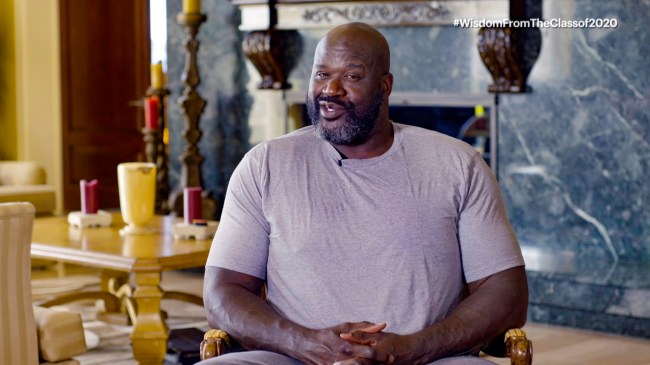 While Shaq was dominant on the basketball court, he may be even better at his job as an NBA analyst for TNT, with the Hall of Famer always providing a few good moments while the camera’s on him. It’s part of what makes O’Neal so damn entertaining, as he’s always willing to speak his mind and do so in a funny way. And you better believe he still keeps tabs on some of the current players in the league and pokes at them anytime he gets the opportunity.

Shaq’s latest victim? Poor Rudy Gobert of the Utah Jazz, who just signed a $205 million contract extension with the franchise a few weeks ago. Instead of praising the 28-year-old, two-time NBA Defensive Player of the Year, O’Neal saw the opportunity to crap all over the big man, even taking his opinion to Instagram to declare what he’d do to Gobert if he were still playing in the league.

That’s some serious disrespect from Shaq, man. Not only did he clown Gobert’s new contract with the Jazz, but to then claim he’d drop a cool 45 and 16 on him in three quarters if he were still in his prime, well, that’s just the ultimate slap in the face — especially for a guy who prides himself on playing defense.

O’Neal didn’t just use social media to dump on Rudy, though. Just look at what the four-time NBA champ said during a recent appearance on CBS Sports’ All Things Covered podcast after news of the massive extension.

“I’m not gonna hate, but this should be an inspiration to all the little kids out there,” O’Neal said. “You average 11 points in the NBA, you can get $200 million.”

“He’s got a great agent, and I’m happy for him and his family,” Shaq said of Gobert. “With the new rules, you have a pot of money, you have to spend that money. I’m happy for him, but this is a moment for a lot of kids who think they can’t make it.”

It’s hilarious that Shaq doesn’t say Gobert’s a great player, but, instead, admits that the dude’s got a great agent. I mean, considering the Jazz big man just got $205 million and isn’t really considered a superstar in the league, it’s hard to argue with O’Neal.

After hearing the diss, Gobert tried to take the high road and quash any beef, simply doing the very polite thing and downplaying O’Neal’s comments in a response on Twitter.

There is no beef. If people wanna keep speaking negatively about me or keep discrediting what i do it’s on them and all that does is show who they are. I will always be happy for a brother beating the odds. And i’m gonna keep beating the odds. https://t.co/l241ZQ2Qk4

OK, so there may not be any beef between Shaq and Gobert, but, as a man, this has to piss the Jazz center off, right? Like, how the hell wouldn’t this add a little fuel to his fire to prove the legendary big man wrong? Considering Rudy’s got 205 million reasons not to care, I guess it doesn’t matter in the end.