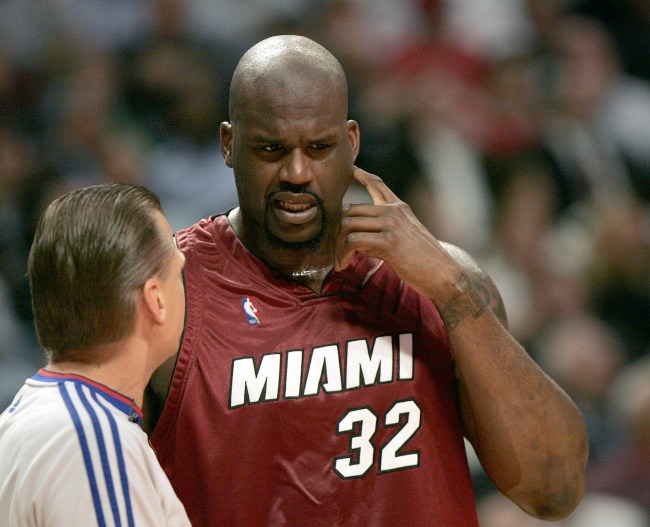 You’ve got to admire the transparency that Shaq always gives when he tells stories, because the big fella never sensors himself when describing the details. And the latest recollection from O’Neal’s playing days came when asked what his favorite memory was while playing for the Miami Heat. Without hesitation, he replied with a short description about nearly coming to blows with a teammate while both were naked in the shower.

During his appearance on The Players’ Tribunes’ Text Message Talk Show with Dorrell Wright, Shaq admitted he and the host nearly went at one another while both playing in South Beach, and that Udonis Haslem was just sitting back waiting for it to happen. Of course this is what O’Neal remembers most about his time with the Heat — not the championship he won.

Take a look below at the text message conversation between Shaquille O’Neal and Dorell Wright.

Shaq: My favorite moment was you tryna fight me naked in the shower and Udonis didn’t wanna break us up lol.

Wright: OMFG I’m crrryyyyiinn. Wait, YOU tried to fight me 1st off hahahahaha and my towel was still on. I’m Cryin.

Shaq: But we hugged and made up.

I’ve got so many questions about this. Why did Shaq and Wright fight in the first place? Did they hug and make up while still naked, or after? How haven’t we heard about this naked fight until now? There’s just so much missing to this story that I’m actually craving more details — which I never thought I’d say about a story involving two naked men who nearly threw down.

Leave it to Shaq to bring this up when talking about his time with the Heat. The guy had so many solid moments during his NBA career that, whether true or just something to get people laughing — which he does a lot — this is one way for us to admire the legend that is Shaquille O’Neal.

As somebody who was technically introduced to his now fiance via O’Neal, the dude is always on my A list. So I really need to know more about all that happened during this near shower fight with Wright.