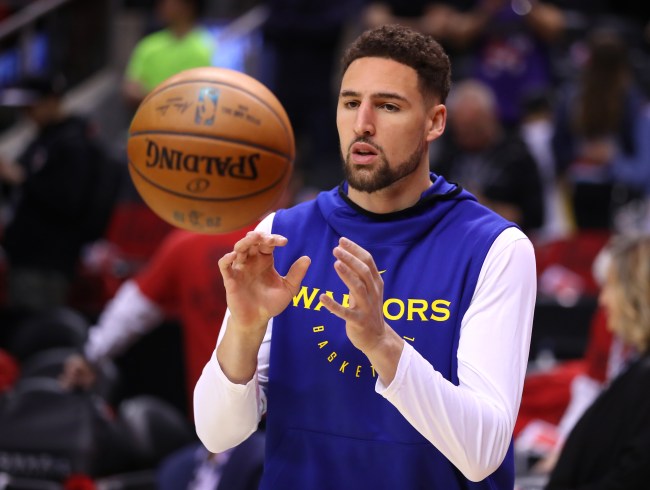 Shaquille O’Neal is one of the most iconic Los Angeles Lakers’ legends ever, with the big fella scooping up three of his four NBA championships with the historic franchise, which led the team to retire his number a few years ago. And, while Shaq doesn’t have an official role with the team, naturally, he wants to see the team do well — which, unfortunately, hasn’t happened recently, with the Lakers missing the playoffs in each of the past six years, while also becoming as dysfunctional and drama-filled as ever in the past year.

With NBA free-agency coming up in less than a month, Shaquille O’Neal has some ideas for how to turn the Lakers’ bad luck around — go after Golden State Warriors star Klay Thompson. That’s what O’Neal said on his The Big Podcast with Shaq today, putting on his fake front-office hat to reveal how he would approach this summer to surround LeBron James with another superstar; and Thompson’s at the top of his list. Here’s how Shaq said he would pitch the three-time champ — who could end up with his fourth ring by the time he hits the open market next month.

There have been rumors that Klay Thompson is sick of playing third banana on the Warriors behind Steph Curry and Kevin Durant, so Shaquille O’Neal might be onto something with the guy heading to the Lakers. Plus, Thompson’s dad, Mychal Thompson, was the No. 1 overall pick by the Lakers in 1978, so there’s a family link, too — not to mention handing the All-Star shooting guard a ton of money could be pretty convincing.

It’s assumed that the Lakers are going to turn things around pretty quickly by getting a bunch of big-named players this summer, and, if Shaq gets his wish, Klay Thompson will be the first person the Purple and Gold will be calling and trying to add.